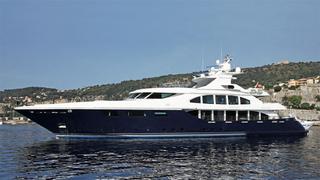 Judith Amselli at Ocean Independence is offering a reduced charter rate on the 49.9m motor yacht Mar from May 2013 in the French Riviera.

Built in 2008 by Ortona Navi, Mar can accommodate 12 guests in six cabins – including a master suite on the main deck with his-and-hers entrances to a large en suite with both a spa bath and shower; a VIP cabin on the upper deck with panoramic views; and four double cabins on the lower deck, two of which can be converted into twins. Oak panelled with wenge flooring throughout, the yacht has a comprehensive entertainment outfit with independent music systems on every deck.

Tenders and toys at guests’ disposal include an 8.5m Alson 750 EFB tender, a three-seater Waverunner, snorkelling and diving gear as well as the usual array of donuts, bananas, wakeboards, water-skis, fishing gear, trampoline and aquaglide.