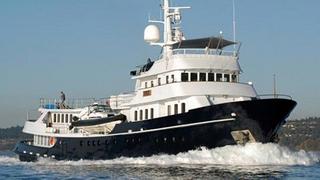 Following her sale in June 2011, the the 49m explorer motor yacht Asteria has now been signed for charter by Tim Clark at Ocean Independence.

A busy itinerary sees her cruising to Phuket in January 2012 and then on to Northern Australia until August before crossing through the Pacific islands to Chile in the autumn and on to Antarctica dor the winter of 2012/2013.

Built in 1970 by Greece’s Anastassiades & Tsortanides yard, Asteria was converted in 2000/2002 by Northport Engineering in New Zealand.

Now fully Lloyds classed, she accommodates 12 guests in six cabins and, carrying a heli-deck, is fitted with zero speed stabilisers and comes complete with a large Northwind aluminium RIB tender.