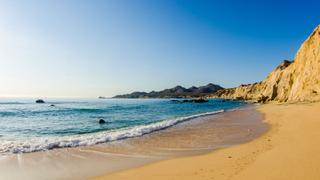 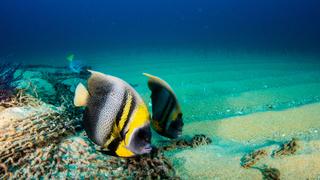 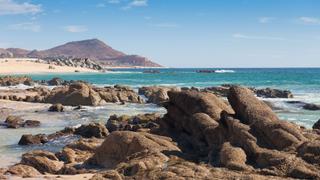 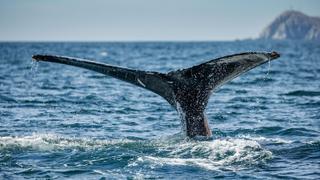 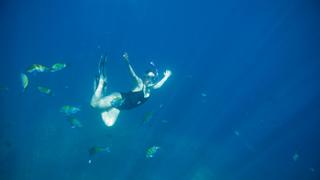 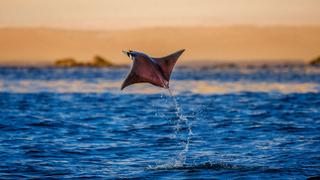 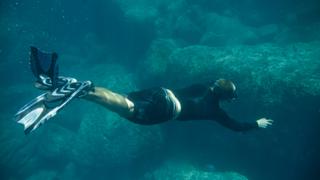 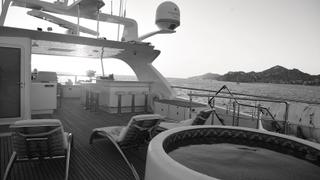 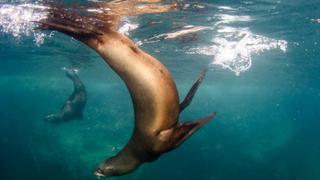 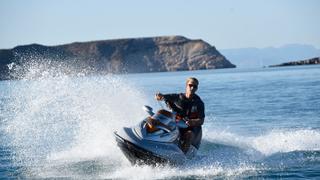 The Desert Sea: exploring the Sea of Cortez on board Komokwa

On my first attempt, I nearly leap right on top of a massive whale shark; one of my flippers skims the dappled grey skin that is as unique as a human fingerprint. One moment it is there, taking up the entire view through my mask, the next it’s a blur receding into the sandy shallows.

We have been hunting them all morning, armed with the lens of an underwater camera. We stand on the raised bow of the boat and peer over the rails. Flippers on, masks perched on foreheads, ready to jump in the moment we spot the large shadowy mass or, if we’re lucky, the more telling sign of a grey tail fin cutting through the blue green water.

Spread across a long bay within the Sea of Cortez the whale sharks are not easy to find despite their impressive size. It is a quest that requires patience and speed. Fifteen minutes pass between each sighting but, when one occurs, everything happens in fast forward. We pile into the water and then swim as quickly as possible to keep up with the magnificent specimen.

It goes against human instinct to swim towards a shark. Fortunately, even though these creatures are enormous – the ones we see are six metres and most grow to 10 metres – they aren’t man eaters. However, there are rules to protect both the sharks and their admirers. Only five people are allowed in the water at once, and you have to avoid their strong tails, which can knock you out.

Our guide, Raul, eventually says that we need to find bigger whale sharks, which are slower. Finally, we spot our Moby –a behemoth swimming languidly, which could not care less about a pack of snorkelling stalkers. Forall its mass, the shark moves with grace, giant tail swaying. It is easy to keep pace with this one, and I am hypnotised by the steady utter of its gills. It opens its mouth, water pouring in, filtering out food – plankton, but also algae, shrimp, sardines or sh eggs. I look around and realise my fellow swimmers have fallen back; it is just me and this shark alone. If I could I might follow it for ever.

Swimming with whale sharks is just one of the miraculous aquatic activities experienced in the days I spend cruising the Sea of Cortez on board the 40 metre Horizon motor yacht Komokwa. The sea is a veritable aquarium, filled with humpback whales, sea lions, giant rays and protected dive sites brimming with tropical sh. Even snorkelling off the yacht in a quiet anchorage reveals an exquisite carpet of yellow and orange corals.

And during this adventure we’ve seen few tourists and no other superyachts. The seclusion is perhaps not surprising considering how few people even know where the Sea of Cortez is. The narrow strip of water between Mexico’s Baja peninsula and the mainland, which is also known as the Gulf of California, remains largely a secret, waiting to be discovered.

The tip of Baja is a different story. Set at the confluence of the Pacific and the Sea of Cortez, Cabo San Lucas and its neighbour San José del Cabo form a beach town on the rise, entirely unrecognisable from a decade ago. There are high-end hotels, excellent dining options, celebrities and, of course, tequila fuelled nightlife. When St Barths was battered by Hurricane Irma, many regulars high- tailed it to Cabo for the New Year’s Eve festivities. The combination of an international airport and huge private airport makes it easy for visitors to jet in.

After a multi-year trip around the world, Komokwa’s owner, Canadian Brian O’Sullivan, has decided to base his yacht in Cabo and put her up for charter. The former Commonwealth Games swimmer, who narrowly missed out on a spot in Canada’s Olympic team, first visited the Sea of Cortez many years ago on his way across the Pacific, bound for Tahiti. The accessibility and excellent provisions were partly what brought him back, but it was more than that. “I’m told that one third of the world’s marine life is present in the Sea of Cortez,” says O’Sullivan. “Moreover, there are virtually no large yachts plying its azure waters.”

We start the journey in Cabo, motoring out in the late afternoon to watch the glowing sunset paint the sky a pink and orange ombre, framed by the famous rock formation El Arco. As dusk falls, we dine on the aft deck, and within moments the lights of Cabo fade away and we are surrounded by darkness, city lights traded for a sky full of stars. We motor through the night, on our way to the protected national park islands of Espiritu Santo and Partida.

“Espiritu is my favourite,” says O’Sullivan. “It has large protected bays, dozens of trails on land with perfect vistas of the anchorages and the open Sea of Cortez, and a few long beautiful beaches perfect for picnics and walks. There’s also some bays where, at low tide, sandbars reach out for nearly a mile, making for great sports playing elds for my son’s rugby pals.”

In the morning, I wake up to an unreal view – towering brown mountains, dotted with cacti. It’s the perfect south-west desert scene, except that here a golden strip of beach is painted at the foot of the mountain. We are floating in the clearest blue water, staring straight down to the sandy floor of the anchorage. It’s like Arizona with a beach.

Espiritu Santo is encircled by deeply indented coves and narrow, fjord-like bays, like a piece of dough that a chef squeezed and left deep finger marks in. This makes for a bevy of protected anchorages with solid holding. Bahia San Gabriel, at the south-west end of the island, is an expansive bay with one of the best beaches on the island. For hikers, a trail through a small canyon leads over to the east side of the island and to Playa Bonanza, which has a glorious horseshoe-shaped beach stretching two miles, and a large reef off shore with good snorkelling.

We spend the morning playing in this spot –paddleboarding to the shore and taking a tender towards the mangroves, where a gathering of pelagic birds show off their diving feats. Snorkelling around the rocky shore of the anchorage reveals vibrantly coloured angel fish and some unique coral formations.

For lunch, the crew prepares a beach picnic and we sit under the shade of the parasols enjoying the view of Komokwa, her grey hull handsome against the clear turquoise waters. Komokwa’s charter assets are obvious. Besides the doting crew, she has an expansive sundeck with a barbecue and spa pool, a gym with a sauna and there are two master suites, ideal for couples travelling together.

The next morning, we enjoy a warm-up act for the whale sharks, taking the fast RIB to the northern end of Partida, where a sea lion colony claims a group of rocks called Los Islotes. Slipping into the water from the RIB, we spot a pack of pups, which curiously swim up and then dart to and fro, back flipping and daring us to chase them. “Just like the sea lions in the Galápagos,” says O’Sullivan, “they are very playful and love to swim with you and occasionally slap your bottom with their flippers.”

After an exhilarating excursion, we look up to see that Komokwa has circled around to pick us up here and bring us back down to

Puerto Ballena, a three-lobed bay surrounded by rocky cliffs, painted by nature in deep browns and bright reds. It’s the ideal spot for watersports, and the water skis, paddleboards and kayaks are soon launched. We play until the sun touches the horizon, looking out for the elusive green flash.

It’s easy to see why this island is O’Sullivan’s favourite so far in the Sea of Cortez, but there is much more to explore. En route to Espiritu lies Cabo Pulmo National Marine Park, a 60 mile stretch where fishing is totally banned – a diver’s paradise. To the north, Isla San José and Isla San Francisquito boast abandoned salt flats, miles of mangroves begging to be explored by tender and more long beaches. And even this is just the beginning of the sea, which stretches miles and miles further north.

Encountering whale sharks (the season is September to May) simply adds to the incredible taste of natural beauty and seclusion that we experience during the trip. “Once you are whisked away to the yacht you leave almost all of life’s day to day concerns behind,” says O’Sullivan. This narrow sea is rich in possibilities, the perfect adventure for those seeking solitude and mother nature at her most glorious.

9 day yacht charter to discover the Sea of Cortez