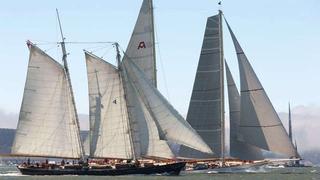 Spectacular sailing on Day One of the America's Cup Superyacht Regatta

While the Golden Gate bridge disappeared under a blanket of fog, the fleet of sailing superyachts taking part in the America’s Cup Superyacht Regatta, co-organised by Boat International Media and the America's Cup, readied under sunny skies off Pier 27 in San Francisco for Race One of the event.

With a diverse range of sailing superyachts – from the 30m CNB Chrisco to the 90m schooner Athena, and from the replica of the original Cup winner America to USA76, an example of the later generation of America’s Cup Class monohulls – the stage was set for some classic fun racing against the spectacular backdrop of San Francisco, the Bay and Golden Gate bridge.

Sailing under the International Super Yacht Rule (ISYR) and with the slowest yacht set to go first under a staggered start sequence with four minute intervals, the race committee opted for two custom courses – one each for the Racing and Exhibition classes. The fleet would start off the San Francisco waterfront, then head north towards Angel Island, back south to round Alcatraz, then head northwest towards Sausalito, then follow the line of the Golden Gate south before turning to run home close in to the city waterfront.

Cracking winds that built to over 20 knots meant fine sailing with a mixture of glorious sun and the foggy backdrop of the northern Bay, and as the fleet made their way round the course compression meant that there was some spectacular boat on boat action.

‘It was very pleasant and we really enjoyed it, and much more importantly the owner really enjoyed it!’ said Andre Engelom, captain of the 55.5m Adela. ‘We had a good ding dong with the yacht Adele, and who could have thought we’d be sailing with the spinnaker up all along the San Francisco waterfront!’

For the 90m Athena, participating in the Exhibition Class, the day got off to an interesting start. Owner Jim Clark insisted several times that Athena is ‘really not a race boat,’ but with Ken Read frequently taking the helm and Clark on the bridge, it was clear that their aim was not to be part of a parade.

With 10 minutes to her start, sails drawing well and Read and Captain Max Cummings agreed on line and first leg tactics, a spanner was thrown into the works when the Coast Guard and San Francisco Bay Pilots Association decided the yacht needed an association pilot as well as the independent pilot who was already onboard.

After a thrilling sail and turning for home, Clark and Cummings ordered the top sails out to ‘put on a show’ for the spectators (and increase sail area by 350 square metres), and with the current threatening to send the yacht past the lay line, there wasn’t a sound on the bridge except the crackling of the vessel traffic radio as all eyes strained on the bearing to the mark. The big grin on Clark’s face as Athena took the gun and the cheers of her crew and guests told the story. Another race in the bag.

It was the America's Cup Class yacht USA76 that took the win in the Racing Class on Day One, ahead of 55m Adele, Adela and the replica of the original America’s Cup yacht America.

Racing resumes on Wednesday 11 September, and all will be hoping the superb conditions of Day One will be repeated.