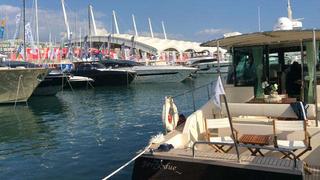 The 54th Genoa International Boat Show has reported its results from this year's show, which saw more than 109,000 visitors in attendance.

The show took place over six days in Genoa, Italy. New yachts, accessories and nautical gear was on display at the show, which was the first to be coordinated by I Saloni Nautici SpA. The new organisers goal was to create a more modern and efficient structure for the boat show exhibition and also roll out a three-year plan to bring back the strength of the Genoa boat show.

'For the first edition entirely coordinated by the new organisation, we aimed at reaching over 100,000 vistiors, and we actually managed to achieve it,' says Anton Francesco Albertoni, president of I Saloni Nautici SpA.

Show organisers state that more than half of the exhibitors reported greater satisfaction in the success of this year's show in terms of contacts established. The 'sea experience' – which gave visitors the chance to sea trial yachts at the show – were a success, involving 1,300 boats and more than 3,000 people.

The 55th Genoa International Boat Show is already scheduled and will take place September 30 to October 5, 2015. Next year's show will also follow the Wednesday to Friday schedule from this year.