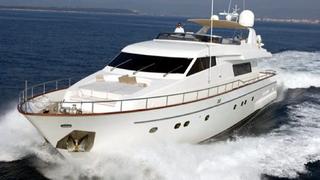 Built in 2003 by Sanlorenzo, this sleek looking flybridge motor yacht with an equally sleek cherrywood interior accommodates nine guests in a master suite, VIP stateroom and two twin cabins plus a Pullman berth.