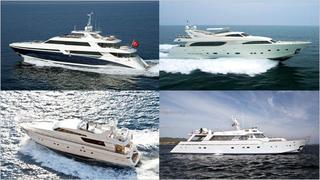 YPI to display four motor yachts at the Antibes Show

Mark Duncan at Yachting Partners International tells me that broker Gregory Gheraia will be taking four motor yachts to the upcoming Antibes Yacht Show and here they are:

Constructed in composite and completed with an Awlgrip paint system, this yacht has RINA Pleasure Craft Class plus MMA LY2 certifications and comfortably accommodates up to 14 guests in six cabins including one master suite, one VIP cabin and three guest cabins.

The 34m Lady Maria is a RINA + MCA classed Ferretti Custom Line 112 model, built in 2007 to a design by Giovanni Zuccon. She can accommodate a total of 12 guests in one master, two double and two twin cabins, along with two Pullman berths.

Two MTU diesel engines provide a total of 5550hp, which offers a maximum speed of 28 knots and Lady Maria is asking €6.3 million.

Salve is a 29.75m classic built by Benetti in 1974. She was returned to her original excellent condition during a year-long refit in 2007/2008 and is now seriously for sale by an owner who’s moving up to a larger yacht. Working with a crew of five, she is RINA compliant, accommodates up to 10 guests comfortably and cruises at a very pleasurable 13 knots.

The 22m Komboloi was built in 2008 and is, says Gregory, without a doubt the best Sanlorenzo 72' on the market.

She has had very little use and has been professionally maintained by her crew and an attentive owner. Comfortably sleeping 8 guests in 4 lovely cabins, one of which can be turned into an office opening onto the hallway.

Komboloi boasts a customised interior and several material upgrades and is asking €2.15 million.