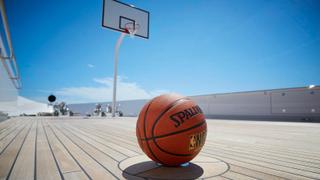 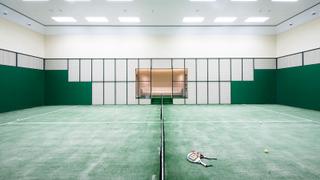 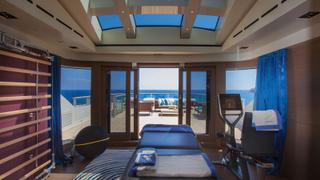 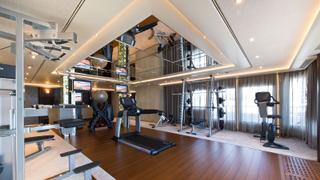 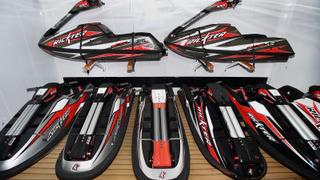 Game on: How sports courts became the new on board must-have

Superyachts need more than just a standard gym and pool to keep pace with today’s fitness-obsessed owners. New technology and clever use of space are enabling a new generation of onboard sports facilities, says Dominique Afacan...

Talk about sports in the superyacht world and thoughts immediately turn to the water. That makes sense, given that boats are surrounded by it – but to assume that swimming, diving, jet-skiing, and other aquatic pursuits are the beginning and end of the sporting superyacht life would be to miss half the picture. The enormous yachts of today are capable of carrying with them full-size tennis and basketball courts, yoga studios and every other niche fitness amenity hugely expanding the variety of sports you can do on board.

Back in the day, cruising was more about the destination than the journey. Long voyages were seen as a headache – largely because boats offered very little on board to break the monotony of days and weeks spent at sea. Cruise ships eventually introduced shuffleboard courts to ease the boredom and, over in the yachting world, rudimentary gyms slowly began to spring up where space permitted. Today, any superyacht worth its salt has at least a few choice items from Technogym on board.

Gyms might lie at the more routine end of on board sporting facilities – we’re not talking basketball hoops or tennis courts just yet – but they have advanced a great deal since the early days. A whole upper deck on board Benetti’s 38 metre Iron Man has been dedicated to a gym, while a glass-sided gym on the main deck aft of Enigma translates to panoramic ocean views as you burn off the calories.

Superyacht designer Peder Eidsgaard has noticed that owners have an increasingly sophisticated outlook when it comes to working out. “Gyms are becoming good-looking places where you can display your cool, contemporary equipment instead of just being an afterthought,” he says. As such, they are being designed into the yachts from the off. Oceanco’s 88 metre Nirvana is a good example of this, with an inset treadmill and mirrored ceilings creating the impression of even more height.

Eidsgaard sees a new generation of more body-conscious customers as key to the wider trend for on board sports facilities. “There is definitely more of a fitness focus among our clients today,” he says. “A lot of our younger owners have a daily routine that they want to stick to on board, which often includes an hour in the gym in the morning.” In a world where millennials throw around hashtags such as #fitspo and #justdoit and consider working out to be as enjoyable as going out, the trend looks set to continue as this younger generation starts to buy boats. Beyond gyms, pools with jets to swim against have become commonplace – and nobody bats an eyelid if a cabin is set aside for a personal trainer.

Mark Smith, director at Michael Leach Design, thinks there’s also an element of bonding involved in the trend. “We think the biggest factor in the increased demand is that sports facilities can be a common bond within a family or a group of friends,” he says. His firm has designed yachts for owners of American football and basketball teams, and Premier League football clubs. Palladium, the 96 metre that the studio designed for Russian billionaire Mikhail Prokhorov (owner of NBA outfit the Brooklyn Nets), might not have its own basketball court, but it does have a garage big enough to carry a personal watercraft for every person on board. “Some owners want to just get away from their business,” explains Smith, “but others want to have the possibility of a 4G Astro pitch laid on the deck for their team.”

Facilities on this scale are where things get more interesting. The 98 metre Aviva from Abeking & Rasmussen, for example, has a padel court on board with eight metre high ceilings. “A full size padel court has never been done on a superyacht before,” says Pascale Reymond at Reymond Langton, which designed the boat. “This was the owner’s requirement from the initial brief.” She sees these requests as a natural progression, which many of today’s shipyards are perfectly capable of fulfilling. “Most owners have sporting hobbies so why not incorporate sporting facilities on their yachts? Thanks to new technology and ways to adapt space, it is becoming more apparent that many different sports areas can be designed and built.”

Equally impressive is Hampshire II, a 78 metre Feadship designed by RWD that has many of the accoutrements of an adventure playground. On the foredeck, the helicopter landing platform can be transformed for basketball, tennis, baseball, badminton or football. And yes, there’s a giant net to ensure balls don’t go flying into the ocean. Any humans who do want to fly into the ocean, however, can take the zip wire from the crow’s nest. There are plenty more yachts with these kinds of facilities. On board 99 metre Feadship Madame Gu, for example, the helicopter hangar doubles up as a squash court. Meanwhile, the 70 metre Feadship Joy (pictured top), designed by Bannenberg & Rowell, was built for another young owner and has a basketball court on the foredeck.

All of these facilities work wonders in the charter world, of course. Stephanie Archer, senior charter broker at Ocean Independence, confirms: “We are looking at quite a saturated market, so to set any superyacht apart from their competitors we need these kinds of facilities. I’d like to think it encourages the younger generation to charter too.” Archer points out that many charter houses tend to stick with their loyal clients who are getting older and forget to concentrate on young blood. “We need to adapt and be versatile to this kind of market,” she says. Beyond the yachts themselves, Archer sees support vessels as an important part of the picture. “We charter out Game Changer, for example. It’s a support vessel, which leaves more room on the mothership for both sports facilities and extra crew,” she says.

Rob Armstrong, creative director at ThirtyC design studio, agrees. “With an ever expanding market, you see many yachts looking to stand out from the crowd, so stocking your boat with the latest sports equipment or refitting it to include a basketball area, for example, is a great way to attract attention and give you a USP.”

Even without a pricey refit, there are innovations today that can transform a yacht into a sports arena. Take FunAir’s Yacht Golf floating greens; these inflatable targets can be set up in the water and used alongside Albus marine-friendly golf balls, which later dissolve into fish food.

For John Courtney, managing director of yachting at FunAir, the trend is tied to yachts travelling further. “We increasingly see yachts moving away from the usual hotspots where infrastructure is set up for many different activities, and choosing to visit areas that may not have recreational facilities close by,” he says. “Owners and charterers now bring the fun with them by having a full complement of yacht toys for all the family.” The fun doesn’t end at golf – the company also builds inflatable climbing walls, floating trampolines and towering water slides.

There are also some startling advancements in virtual reality, which are gaining much traction in the yachting world. Pascale Reymond recalls a discussion at the 2017 Boat InternationalSuperyacht Design Symposium in Kitzbühel. “One of the speakers explained how virtual reality was used on board due to the owner wanting to replicate his home gym on the yacht. The best way to do this, they found, was using a form of virtual reality. I feel that this will be used a lot more in the future to create more unique and unusual spaces.”

It’s a technology that is bound to shape the future of sports on board yachts – and indeed Mark Smith, from Michael Leach, mentions that he is currently looking at installing “extraordinary virtual golf facilities as well as a virtual shooting gallery that will include the whole yacht”. Those who prefer spectating to playing will also benefit from VR, which is already capable of enabling users to view live sporting events from afar as if they were there. For the time-poor superyacht owner, what could be better than being in two places at once? If your next charter means missing a big game back home, just retreat to the saloon and strap on a headset.

California-based NextVR is leading the pack here, providing virtual tickets to live events around the world. Every NBA game this season will be broadcast in VR and more live sports broadcasts are being added all the time. Perhaps soon superyachts won’t pile into Monaco for the grand prix, choosing instead to immerse themselves in the action from anywhere in the world.

Green machines: How to create an on board garden

The Home Workout Equipment You Need For Isolation