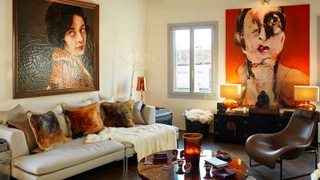 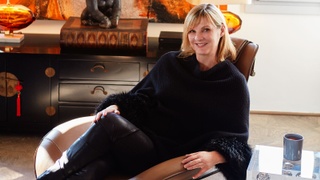 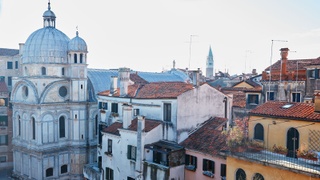 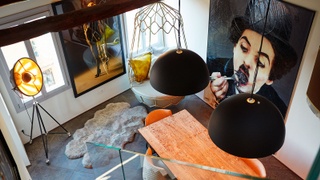 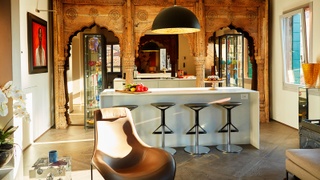 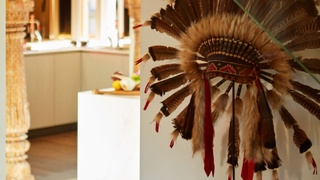 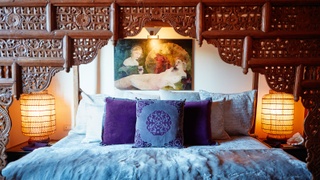 Inside the home of interior designer Pascale Reymond

Looking out of her home, at the spectacular church of Santa Maria dei Miracoli below, it’s hard to believe that this incredible property in the heart of historic Venice was not the result of years of research – rather, a triumph of online shopping. “I surfed and surfed to find the perfect place,” enthuses Reymond, who co-founded yacht design studio Reymond Langton with partner Andrew back in 2001. “In the end I think the agent was a bit annoyed that I found it online – this little jewel was very discreetly advertised. But then I have a place on the coast in Brittany that I bought without even seeing, so...”

In fact, the couple already had a modest apartment on the waterfront in Cannaregio nearby, along with homes in Bath, London and France, but they craved a pad to escape to, “a bigger place to do drawings and work”, with a large space for entertaining – prompting Reymond to look online.

The building was “crumbling, almost derelict”, she says. “We looked at a lot of horrible flats for this budget, but this time we got lucky.” Not long after their offer was accepted, they began the restoration work.“We wanted to make a really open space, so we knocked all the ceilings down to expose the beams, moved bathrooms and walls around and put in a staircase so it’s much easier to circulate around the building,” she explains. Surely, Venetian planning permission made the whole process incredibly lengthy and complex? “It didn’t actually,” says Reymond. “We had to go through the authorities, but they were surprisingly efficient – far more so than those in the UK.”

It’s an impressively light, bright space, thanks to windows in all four corners of the building – you’d be forgiven for mistaking its contemporary art-filled rooms for an exclusive gallery. Bold pieces that riff on the unexpected provide focal points throughout the apartment, from a giant Charlie Chaplin eating his shoelaces by Lita Cabellut, looming over the dining room table, to a vivid pink neon graffiti heart (Emmanuelle Rybojad) in a lofty bathroom that overlooks the church’s domed roof. Even a walk down a corridor reveals a hidden surprise – go one way and you’ll see an iconic Barbie by Parisian artist Cécile Plaisance. Head back, and she’s in a burka...

“I grew up in very bohemian surroundings,” explains Reymond. “There were paintings on the walls everywhere, and though my father was a classics professor, he spent all his money on supplies and wood for his sculptures.” Hardly surprising, then, that at the top of the main staircase you’ll find a small easel nestled in a corner – ready for Reymond, who studied art history and is a painter herself – to pick up should the creative mood strike.

It’s not just what hangs on the walls of the building that gives it such immense character and interest either, it’s what’s set inside them, too. Reymond has a bit of a thing for doorways. “I really believe that each object tells a story, and when you bring old doors into a building, you’re bringing in their stories, their soul,” she says. Carved ancient wooden arches in the kitchen, “from a temple somewhere in India,” seem strangely at home here. “When I first mentioned putting these huge things in this room, Andrew thought I was mad,” she laughs, while pointing out the antique Chinese sliding doors that divide the master bedroom and separate snug from the hallway. “If I find a nice door anywhere, I buy it and put it in storage,” says Reymond. “Really good- quality old Chinese and Indian ones are especially hard to come by these days – if I find them I have to keep them.”

Asian influences continue in the form of an imposing Balinese opium bed, pieces of furniture and trinkets. These items were sourced by Reymond together with Indigo Antiques in Bali or Thailand and then shipped home. Of course, these weighty items made their final voyage to the flat not by road, but by boat. “With the artworks, we had to close our eyes!” she exclaims. “That’s the lunacy of Venice – now that these things are here, they’ll never leave.”

Of course, no Venetian home would be complete without a few local masks, lamps and glass objets sourced from the many small boutiques nearby. The end result is eclectic – busy and yet peaceful, high-end and yet homely, something Reymond putsdown to a mixture of “raw, unpainted, historic wood”, balanced by cosy textures and lighting.

“I have candles all over the place, comfy cushions, everything is soft,” she explains. “Something we’ve stolen from yacht design is perimeter lighting, so we have a slot all around the wall where the light shines and reflects off everything, and looks really pretty and atmospheric. I don’t think downlights are anywhere near as flattering.”

Are there any other yachting influences present in the apartment? “Absolutely not!” she laughs. This is her creative project, her masterpiece. “This is me,” she explains. “I think a lot of clients would be surprised by my home, because it’s quite different from a lot of the projects we’ve done. But I don’t have to prove myself, and I have to have a playground – if you only design for clients then you become a different beast.”

Already, her sights are set on the next project – a Parisian flat in Montmartre or something in Rome – but her passion for Venice runs particularly deep. “I was five years old when I first came here with my uncle, and I was blown away,” she recalls. “I can remember peering out of a little vaporetto on the Grand Canal, and I couldn’t even see out of the window.” And then there are more memories, of family visits at age eight, 12, 15, 18, crossing bridges and seeing the sights.

But, explains Reymond, it was Langton who first put the thought of Venice into her mind, after she received an insurance payout from her former flat, which was in Garrick’s Villa, a Grade II-listed property in Richmond that had rather dramatically caught fire. “I suddenly had this money, which I thought I’d lost, and I was looking at a flat in Bristol to rent to students. Andrew said, ‘Why don’t you buy a flat in Venice?’ And I thought, ‘You know what? That’s a very good idea.’”

At the moment, the couple are here for a whistle-stop visit – a few days on the tail end of the Superyacht Design Symposium, before heading back to Bath for meetings. Their studio has a full project list; at the time of our interview, yachts Bravo Eugenia, Lady S, Project Artefact and Project Neptune are on the books, among others. January and February is their favourite time to visit, when it’s “super quiet, and you get a lot of good sunshine – you can even have lunch outside if you find a sheltered place”, though they don’t manage to stay here as often as they’d like.

Better this way, though, they say, reflecting on the early days of their business when Reymond sold her farmhouse outside of Paris, and Langton sold his at, to stump up the cash to launch the company. “Within eight months we’d spent everything – and we didn’t have a single client,” remembers Reymond. “You had this panicky feeling like, ‘Oh my god, this is not working out.’” They credit fellow designer Terence Disdale for their first project, after he introduced them to the owners of a 42-metre yacht in Spain. Almost immediately, the phones were ringing, and the rest, as they say, is history.

And so, after a few days’ respite, it’s back to the office for Reymond and a hectic schedule of meetings and presentations before jetting off to client meetings worldwide. Venice, however, will soon be calling. “I was born on a beach,” she explains, “and all my ancestors on my mother’s side worked on ships, a long time ago. I was the first one to rediscover yachting, and no matter where in the world I am, I can only go so long on dry land – I just have to be by the water.”

All images courtesy of Uli Weber.

The Monte Carlo spirit: Inside the dream house of Monaco's design royalty

Refitting Rome: How a superyacht designer renovated a Pope's apartment