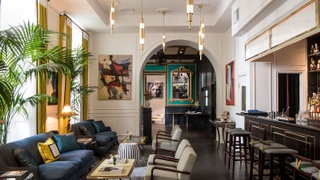 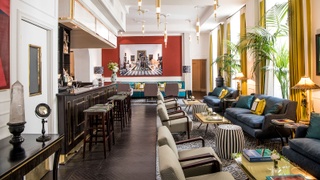 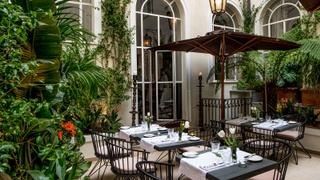 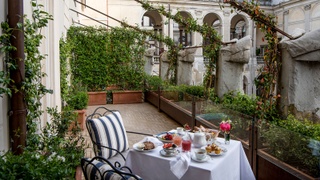 Hotel Vilòn is a historical hideaway enriched with modern glamour, lodged in the cobblestoned heart of Rome. Accessed via an unshowy doorway on Via dell'Arancio, the building is an annexe of the Palazzo Borghese that was previously a “School for Poor Maidens” run by French nuns at the behest of 19th-century aristocrat Princess Adelaide Borghese de la Roche Foucauld. For its 21st-century reincarnation as a boutique hotel, the owners called on famous Roman set and interior designer Paolo Bonfini, who penned all architectural details and much of the décor, as well as illustrious interior designer Giampiero Panepinto, who’s work centred on communal areas.

The effect is chic, relaxing and faintly theatrical. “When we design scenography, we start from a story and put it on stage following the evocative emotional scale of the image rather than the chromatic one,” says Bonfini. “For Vilòn I did exactly that. I treated it like a film where history is our city inserted in time and the actors of this story are the guests of the Vilòn. Every day our guests enter the hotel and go on stage on their vacation.” The role of that history is an essential one in guests’ experience, as Panepinto notes, “I was impressed and inspired by the magical charm of the environment and by the special energy and different shades of light that are in every corner of this incredible building.”

The jewel tones and gold flourishes of the lounge, with its high-glamour bar, pick out rather than overpower the architectural mouldings – while injecting a feeling of vitality into the historical space. Panepinto chose the velvets and linens that cover the curving lines of the Bonfini-designed furniture, as well as selecting architectural and art photography by Massimo Listri to “reflect the soul of the project” as Bonfini puts it. Panepinto describes his work here as “transforming and adding colours, choosing fine textiles, antique furniture and sculpture, arts and detailed lighting”.

“To me, the inner patio was the most difficult part,” says Panepinto. “Small and narrow, without any escape in terms of perspective. I solved it by creating a gorgeous, natural all-green garden with many magnificent plants of rapid growth, to give the impression that they have been there for a long time.” The finished space is a refreshing and elegant oasis with wrought irons lanterns: a romantic spot for breakfast and an unexpected pleasure in the baking centre of the city.

The décor flows from the canvasses propped against headboards and slung on the walls. “The colours I used in the rooms reproduce the prints of illustrations by the English botanist Robert John Thornton,” says Bonfini, to imbue spaces with the spirit of this “elegant and gentle man”. The mint, earth and coral tones of the botanical prints bleed into the palettes of rooms, while the shades and lines of modern artworks by Corrado Sassi, as well as dark wood floors, harmonise with the overall theme.

“In ancient Rome, the Romans had a close relationship with water,” says Bonfini. “At the beginning of the designing phase, we used to call the bathrooms ‘water zones’.” Indeed, in this modern Roman creation, an unusual degree of space and care has been given to the bathrooms, which boast gargantuan showers. The style is faintly art deco, with monochrome marbles, glinting high gloss stainless in 1920s style wall sconces and cut-glass pots for cotton wool and nail files.

“What influenced me the most is the garden of Palazzo Borghese, which we can see from the windows of the back of the hotel and where most of the beautiful suites face,” says Bonfini. The busts and stone pathways of these formal gardens separate the hotel from the 450-year-old palace, seat of the Borghese dynasty, which now houses Rome’s most elite gentleman’s club, Circolo della Caccia. Inside the hotel’s Melangolo Suite, the building’s sand tones are carried through the bedroom décor, while outside the trailing creepers that border the terrace make it feel one with the private gardens they overlook.

All images courtesy of Valentina Stefanelli.