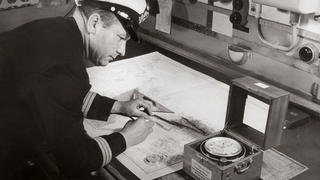 Book it now: Glashütte on Board marine chronometer exhibition

While beautiful marine chronometers are now a rarity more often found as luxury, decorative objects, for centuries these intricate instruments were seafarers’ only way of navigating their passage across uncharted oceans. This new exhibition celebrates the history of these important timepieces – as well as the achievements of their famous manufacturers including Fridolin and Paul Stubner, Gustav Gerstenberger and Herbert Weydig.

Presented as a timeline, the exhibition starts with Glashütte’s first marine chronometer - created for the German Navy in 1886 – and takes in many key events, for example, the founding of the German Naval Observatory in Hamburg as a testing site for these instruments.

Designed with the aim of making these complex machines easy to understand, the exhibition traces their story all the way up to Baselworld 2016 where Glashütte presented the latest version of its Senator Chronometer as the modern chronometer for the wrist. With an elegant blue dial and classic good looks, the timepiece pays fitting homage to its predecessors with a sophisticated calibre 58-01 movement and small seconds and power reserve subdials.

The Glashütte on Board – 130 years of Marine Chronometers from Saxony exhibition is open from June 17 – November 20, 2016. Visit uhrenmuseum-glashuette.com for tickets and information.

7 of the best new watches from Baselworld 2016