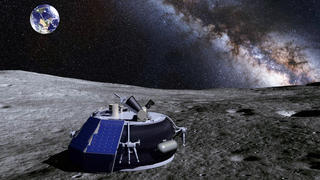 While the most remote destinations many of us can ever hope to reach are spots like Vanuatu or Indonesia’s Raja Ampat archipelago, those with loftier ambitions will be pleased to hear the prospect of commercial Moon landings has just taken a big step forward.

US-based spaceflight venture Moon Express has just been given approval by the American government to undertake the first Moon landing by a private commercial enterprise. The company’s lunar mission is slated for 2017 and is being carried out as part of Google’s Lunar XPRIZE competition – a $30 million contest aimed at incentivising entrepreneurs to create new methods of affordable access to the Moon and beyond.

Of course, travelling into space is a costly business and Moon Express does not propose to land on the Moon simply for the fun of it. The recent discovery of water on the Moon means it could hold vital resources for the future of humanity and Moon Express intends to undertake significant experiments to determine exactly how these can be utilised back on Earth.

“The Moon Express 2017 mission approval is a landmark decision by the U.S. government,” said co-founder & CEO, Bob Richards. “We are now free to set sail as explorers to Earth’s eighth continent, the Moon, seeking new knowledge and resources to expand Earth’s economic sphere for the benefit of all humanity.”

“The sky is not the limit for Moon Express — it is the launchpad. This breakthrough ruling is another giant leap for humanity. Space travel is our only path forward to ensure our survival and create a limitless future for our children,” added co-founder and chairman, Naveen Jain. “In the immediate future, we envision bringing precious resources, metals, and Moon rocks back to Earth.”

Although commercial Moon landings for the general public are still a long way off, this landmark ruling does set a new precedent for private companies wishing to monetise opportunities outside the Earth’s orbit. Should the technology for everyday space flight ever become economically viable it may be just a matter of time before you can book yourself a ticket.

The beginner's guide: 4 ways to fly by private jet

Buyers' guide: The Best Private Jets Worth Investing In