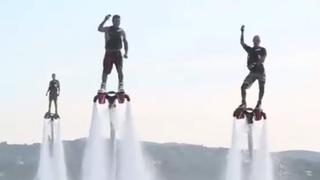 Synchronised flyboarding is now a thing

As impressive as they are, flyboards are nothing new. In fact, if you’ve been cruising the Mediterranean this season, you’ve almost certainly seen a pro-flyboarder performing some impressive tricks firsthand. However, we’re willing to bet you probably haven’t seen a dozen flyboarders all doing stunts simultaneously.

Probably not for beginners, it takes some skill to make sure you don’t accidently knock over or ‘fly’ into another boarder’s hose when there are that many of you riding at once. However, the boarders in the video above all seem quite at ease and, judging by their tricks, we’re going to say this probably isn’t their first time on a flyboard.

Performing flips, spins, dives and even tandem boarding with children on their shoulders, there is a certainly a sense that the men in the video are showing off and trying to impress one another with their acrobatics. However, there also seems to be some teamwork at play and, at one point, the 12 boarders move into a spiral shape around a large yacht offering a brilliant aerial view.

It seems like all that showmanship pays off, too. Towards the end of the film the men are shown giving flyboarding lessons to young children and holding them steady as a new generation of riders is inspired by the display put on by the pros.

Flyboarding is just one of many toy box gadgets which has been gaining popularity over the last few years. Extreme watersports such as kitefoil have been gaining traction for thrill-seeking charter guests while hoverboards are fast becoming the must-have superyacht toy of the future.

Yes, this man really is surfing on a motorbike