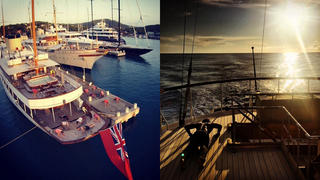 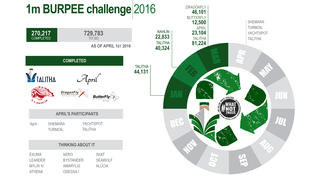 There’s has been much talk about how plastic pollution is one of the biggest threats facing the world’s oceans but there are many other types of waste – including that created by the superyacht industry – that is contributing to this problem.

To raise awareness of the issue and get captains, crew and owners thinking about how they can reduce waste on their yachts, the crew of _Talitha _have pledged to complete 1 million burpees by the end of the year as part of the WhatNot2Waste campaign.

Beginning in January, the crew of Talitha are completing multiple daily sets of the gruelling press-up, squat and jump exercise with some even getting in to a routine of doing up to 200 per day. The entire crew has also joined the 100 Burpee Club by completing 100 uninterrupted burpees in a single session.

Totalling an astounding 44,131 burpees in their first month, the crew of Talitha are now calling on fellow superyacht crews to join the challenge and help them reach the 1 million total. Participating superyachts must sign up for a minimum one month stint and, to date, Dragonfly, Butterfly and April have all helped bring the total number of burpees to over 270,783 - with Shemara_ _and _Turmoil _set to join the fray in coming months.

So how does all this help the problem of yacht waste? Well, the crew of Talitha have been doing far more than just exercising to tackle the issue. Small changes, for example, the strict separation of recyclable rubbish, reduced on board meat consumption, the use of organic lubricants and biodegradable cleaning products, replacing plastic bottles with CamelBak reusable bottles and reducing Transatlantic crossing speeds to reduce fuel consumption, have made a huge difference.

The crew hopes that by getting other yachts involved with the WhatNot2Waste burpee challenge they can also spread the word about the easy and significant changes other yachts can make to reduce waste. It is also hoped that by talking to marinas about the problem, easy recycling of rubbish can become the norm rather than the exception.