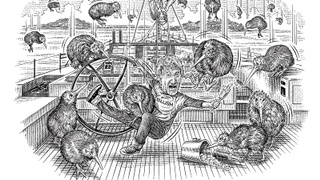 Lippy from the Liffey: Eddie Jordan on his love for New Zealand

What is it about New Zealand? The country and its people have made quite an impression on Eddie Jordan, for whom the Kiwis’ America’s Cup defence cannot come soon enough

So the plan at the moment is to head down to New Zealand for the America’s Cup in 2021. It’s in March, so I’ll time it with some Pacific cruising. I’m keen to get back to Rangiroa, Vanuatu and maybe even Fiji. It’s a great excuse to get the boat down there. The question is how to get there – east or west? I’d like to go east from the Med as I need to tick the Suez Canal off the bucket list. I’ve done the Caribbean a million times and the Panama Canal, Galápagos etc, so I don’t need to go that way again. Of course, I could always leave the boat behind and charter something down there, but naturally I’d prefer to be on board Blush. I know the Kiwis will put on an amazing show.

There’s something about people from New Zealand. How many of them are there? Four million? Five? Yet they seem to punch way above their weight in everything they do, from rugby to sailing. One of my favourite Kiwis is Russell Coutts. When you talk about true sailing genius, that guy’s right up there. It’s a truly fascinating country. Sometimes you go there and it feels like it’s 10 or 20 years behind, but it’s not really. It’s just the way they go about things, and the pace of life. They all just seem so comfortable in their own skin, and don’t feel compelled to rush madly around the whole time. I’m sure we can all learn plenty from New Zealand, just in the way they approach life.

When I had my Formula One team, I always tried to employ Kiwis – they were always so adaptable. If one guy was trained as a welder, he’d also somehow be able to machine stuff and fabricate parts of the cars. I suppose it comes from being so far away from everything; to get something done, they have to learn to do it themselves. They were also the ones who would be there all night if something needed to get done. I basically always feel more comfortable if I’ve got some New Zealanders around, whether in a race team on in my yacht crew.

Where the Wild Things are: New Zealand's South Island by Superyacht