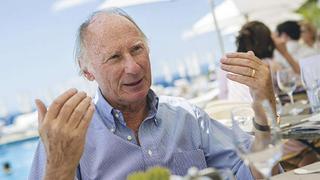 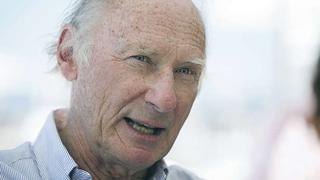 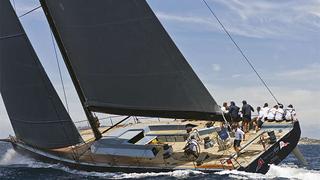 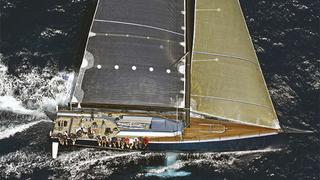 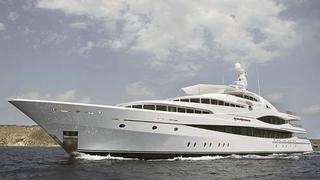 When I invite Lord Irvine Laidlaw of Rothiemay to lunch, he is happy to oblige but warns he is a busy man. Hailing from the north of Scotland and brought up at the edge of the Moray Firth, Lord Irvine Laidlaw divides his time between his homes in Monaco, France, Sardinia and South Africa, and his fine collection of boats, cars and helicopters  never mind his on-going business interests and charity work.

We find a day when he is in Monaco for a meeting and I fly down that morning, breakfast at Terminal 5, lunch on the Côte d'Azur. Despite a recent bout of flu, Lord Laidlaw looks relaxed and happy as he arrives at the Club Dauphin, beside the outdoor pool at the Grand Hotel du Cap Ferrat. It is a stunning day, we have a poolside table and a view of the Mediterranean with superyachts easing past on the horizon. A strong easterly wind isn't discouraging swimmers, and it is a cracking day to be out on the water.

The same cannot be said for the Moray Firth, which Laidlaw describes as "cold, wet and windy and thoroughly unpleasant for sailing. Golf was the main sport for the north-east, or football, and so I had no idea about sailing."

And so this story fast-forwards to 1974, when at 32 Laidlaw was working too hard building his business (he turned IIR into the world's largest conference organiser, before selling to Informa in 2005). He was casting around for some way to take his mind off it all, a pressure release valve.

It was autumn when he decided to take weekend sailing lessons. "I really had no idea why I wanted to go sailing rather than some other sport. Indeed, on one of my first lessons when I went out of Poole, it was darn rough and I was bloody scared, but I thought at least it fulfils one function: I cannot think about anything else (when sailing). No time to think about business or any other aspect of life."

At this point, some people would have looked for a boat to crew on, joined a sailing club or bought a dingy. Lord Irvine Laidlaw advertised in Yachting World for a partner to buy a boat with.

Laidlaw found Peter Lawrence, describing him as a wonderful guy, and together they bought a half-built Varne 27, which was sitting in an old bomb-site near London's Tower Bridge. The completion of the build did not go smoothly, the estimated 200 hours expanding to closer to 1,000.

Lord Laidlaw would head down there at lunchtimes on his motorbike, and be back again for evenings and weekends, but it still wasn't enough to be ready for the 1975 season. Eventually, they got professional help to finish it, and TowerMaid slipped into the Thames in May.

Laidlaw had been on navigation courses over the winter, but knew little about sailing. Fortunately, Lawrence had more experience and they took the boat around to Hamble on England's south coast.

I'm incredibly impatient, and that hasn't changed as I've got older, as my wife will tell you.

The second part of this passage was incredibly rough, and after eight hours of being seasick in a bunk (the only time he's ever suffered) Laidlaw says he would have happily given the boat away to the first person he met on solid ground. "Then it calmed down, I stopped feeling sick, I came up on deck, I had a beer and suddenly the world was a different shade."

In retrospect, Laidlaw was already hooked. What is it about sailing that had held his attention for so long? He thinks for a while, "It was the beauty, and the freedom out on the water."

He and Lawrence took it in turns to sail the boat at the weekends, and Laidlaw cruised a couple of weeks each summer. While he may have started out knowing little, all the small boat cruising served as a solid apprenticeship, at least as far as getting from A to B was concerned. "Although," he adds with a smile, "In hindsight, I should have taken more sailing lessons."

After four years of this Lord Laidlaw became a little bored, and wanted to start racing. The Varne 27 was sold, the partnership dissolved and Laidlaw bought his second boat alone: a Westerly GK 29 he called Gonna Katcha.

"Probably not the best choice (of boat)," he says, a view he holds on most of his subsequent boat purchases. "A (one design) Sigma 36 would have been better, up against the same boats I would have learnt more."

He soon ordered a new GK34 from Westerly that was to be the first Highland Fling but the new boat never saw the Solent. At the end of 1980 Laidlaw moved his base from Britain to manage his fast expanding business in Asia, and never returned. Highland Fling went with him to Hong Kong, and this was Laidlaw's entry ticket to the world of top class offshore racing.

He found a regular crew and raced every weekend, and his enthusiasm did not go unnoticed. Laidlaw was invited to co-charter a boat to join the Hong Kong team in the 1981 Admiral's Cup. "This was like being invited to heaven," he says.

The highlight of his subsequent International Offshore Rule (IOR) career is probably the Bruce Farr-designed boat that became Highland Fling 3. Farr put Geoff Stagg and Chris Dickson aboard, and they came second in the One Ton Cup in 1985 in Poole.

Laidlaw went on to be Team Captain for Singapore (where he was now living) at the Admiral's Cup. He followed that up with a winning 1985 Southern Cross appearance for Britain but only just. They had to brace the hull with floorboards and the spare spinnaker pole to get to Hobart, after the inner laminate fractured in the Bass Strait.

Laidlaw raced IOR for another couple of years - getting married to Christine in Sydney during the 1987 Southern Cross, - but didn't build any more IOR boats. Despite the successes, he was fast getting disillusioned.

"In those days IOR boats were not helmed by owners. Ever. And gradually as an owner you got moved further and further back, until you were eventually left sitting on the dock writing cheques."

The next new boat would be a Swan.

"I had a new wife, and it was to introduce her to sailing in a more modest way. And I was fed up with IOR, the professionals behaving like prima donnas, myself doing runners at the back; they managed to turn off a huge number of owners. I thought the Swans looked like a good family fleet and it turned out to be."

By the end of the 1990s, he was looking for a greater intensity in his racing. He owned a Farr 40 for a couple of years, then in 1998 built an 18 metre boat to a Farr design for the International Measurement System (IMS). It marked a return to measurement rules, and he owned it for five years.

"The difference is now that it's owner/driver," he says. "Owner/driver is critical in keeping people. It's owners who write the cheques and pay for it, a lot of the yachting industry hasn't understood that."

A diversion was provided by the America's Cup Jubilee regatta in the Solent in 2001, for which he bought Tom Blackaller's 1987 12M, USA. "I bought the wrong boat again. Tom never made it work, and I never made it work. I should have bought one of the (1987) New Zealand plastic boats."

Then there was a Farr-designed Wally 80, before he built his current race boat, a Reichel/Pugh 82.

The latest _Highland Fling _also started life as a Wally, but after a contretemps with the class rules is now a stripped-out racer - apart from the teak decks. "It is the most stunning boat I've ever owned. I like fast boats."

Lord Laidlaw also has a new Ker 46 on order to race in Cape Town when he's there, and a couple of Dart 16 cats and a Herreshoff clinker dinghy to keep his hand in with small boats.

He had just returned from racing Highland Fling at the Copa del Rey when I meet him, and had previously competed at the Loro Piano Superyacht Regatta  winning every race in the Performance Division. He also hosted a couple of young sailors from the Royal Thames Yacht Club as guest crew. It's something he does to provide them with experience of big-boat racing. One of last year's guests, Amelia Boadle has become a regular crew.

The extensive racing career has not prevented Laidlaw from continuing his original passion for cruising, and he has added trips to Chile, Alaska, the US, Caribbean and Central America, Australia, Thailand, Philippines, Galapagos, Vanuatu and Scotland to his early explorations of the English Channel - albeit in rather more style. He gave up cruising under sail completely in the 1990s.

Named after his wife, the first motor yacht _Lady Christine _was an Azimut 78, replaced in 1994 by a Heesen 125. "We added four metres at Palmer Johnson, which made it a bit of an awkward looking boat.

"It was semi-displacement and I remember Nick Edmiston saying to me at the time: Wrong choice, you really want a displacement boat for comfort. I said no, no, I want a fast boat, but he was right."

In 2001, Laidlaw changed it for the 55.6 metre Oceanco he still owns, but it's not his only superyacht.

"We had the 40 metre Feadship, Seaflower, which I bought when I sent _Lady Christine _on a round-the-world cruise. After that I said if were going to build another boat its going to be a Van Lent. And they exceeded my expectations in every way."

Laidlaw built the latest Lady Christine at Royal Van Lent based on a design by De Voogt Naval Architects, with an interior by British designer Rodney Black.

"We were at the yard two days a month. I signed off more than 3,000 drawings. We were involved in every little detail. If your'e building a big boat the most important thing is get the original spec right, and don't change it."

The 68 metre Feadship Lady Christine was launched in 2010. "We really like using the boat to take us to places we wouldn't otherwise go to," said Laidlaw. "Next year it's going to go to Brazil, we're cruising Rio and south, then Alaska, from there down to the French Society Islands. And all being well, Antarctica in January 2014."

Cars are also a big part of Lord Laidlaw's life. He tried racing them when he was young, but gave up as a consequence of a lack of talent and lack of money, before returning to it in 1995. By then, he had at least got the money, as he pointed out with a nice touch of self-depreciation.

He now owns over 40 cars around the world; dating back to 1904, a mix of classic and contemporary, road and race cars that he competes with regularly.

I don't know how he fits it all in, but now lunch is done, he must get back to it and I've already made him late for his next meeting. Fortunately, he's not the type to mind.

This article was first printed in the November 2012 of Boat International.

On board with Raffaele Costa, owner of superyacht Sea Force One