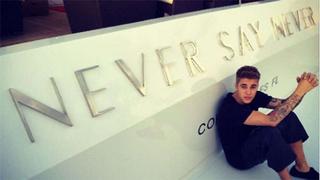 The 37.18 metre yacht Never say Never has been thrust into the public eye this week when teen heart throb Justin Bieber posted a photo of himself posing next to her on photo sharing site Instagram.

Some reports suggest Bieber was attempting to fool fans into thinking he has bought a yacht and named it Never say Never, which is the title of his 2011 3-D concert film.

The popular charter yacht based in either Florida or the Bahamas has always been quite a hit with celebrities. In 2009, she was showcased in a segment for Saturday Night Live when comedian Andy Samberg rapped with T-Pain to a spoof song called Im on a boat.

The Oceanfast yacht accommodates eight guests across four very luxurious cabins (One master, one VIP and two twin). She has a very spacious interior and fantastic outdoor spaces perfect for alfresco dining or toping up the tan. Her impressive exterior and ultra-cool interior design was the work of Jon Bannenberg.

Luxury yacht Never Say Never charters for $88,200 per week (++) in Florida and the Bahamas with The Advantaged Yacht charters & Sales.