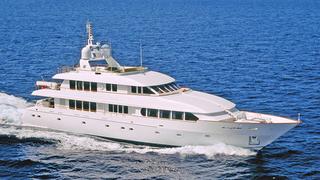 Built in 1999, this superyacht’s interior by Elizabeth Dalton sleeps eight guests in four staterooms and twin 720hp Caterpillar engines give her a cruising speed of 12 knots. Bob goes on to say that Crili has been used privately for the past six years and has been constantly maintained without regard to budget.

Currently lying in the Bahamas and available for inspection in Florida from November, Crili is now asking $8.5 million.