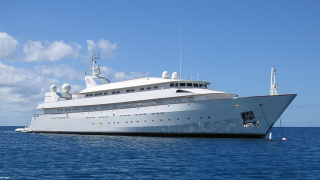 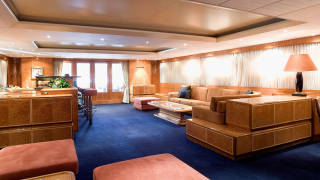 The 65.25 metre motor yacht Yaakun has been listed for sale by Giulio Riggio at Fraser.

Built in steel and aluminium to Lloyds class by Italian yard Nicolini to an in-house design, she was delivered in 1987 to a Middle Eastern royal family and originally named Al Menwar. Always kept in class, her vast interior, created by Claudio Zampetti, accommodates 12 guests in six cabins comprising a main deck master suite, VIP suite and four doubles. All guest cabins have entertainment centres, television screens and en suite bathroom facilities while a further 11 cabins sleep 20 crew aboard this yacht for sale.

In July 2006 she was acquired and refitted by a European owner for a two-year circumnavigation of the world's oceans. Her design, both inside and out, is the definition of 80's chic. In a rare twist, this yacht has not actually been updated since it left the shipyard all those years ago, although she has been refitted several times, most recently in 2017.

Her top speed is 20 knots and she boasts a maximum cruising range of 4,200 nautical miles at 14 knots with power coming from two 4,170hp MTU 16V956TB82 diesel engines. For added comfort and safety, she is fitted with zero speed stabilisers.