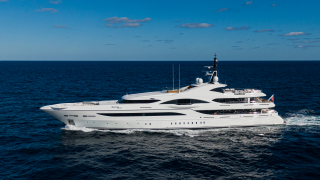 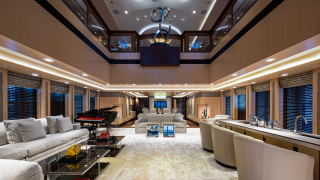 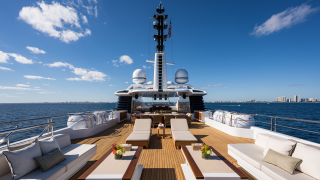 The 72.6 metre motor yacht Quantum Of Solace has had a central agency change and is now listed for sale by Peter Thompson at Yachting Partners International.

Launched in May 2012 by Turquoise YachtsQuantum Of Solace was the largest branded Turkish yacht built to that date. Construction started in 2009 at facilities in Tuzla, near Istanbul, when she was initially known as hull number NB54, the sistership of the 70.54 metre Talisman C.

In February 2010 Quantum Of Solace was sold to a new owner who commissioned H2 Yacht Design to radically restyle the superstructure. As a result, her initial sharp lines became smoother. The completed steel and aluminium hull arrived at the Proteksan-Turquoise (as it then was) yard in April 2011 for her final fitting-out.

The interior, also designed by H2 Yacht Design, accommodates 12 guests in six cabins, all on the main deck. There is a full-beam (12.04 metres) master suite in the middle of the bridge deck with two balconies on either side. The other guest cabins are forward on the main deck.

Other notable features include: an elevator for four people from the lower spa deck to the bridge deck; a helicopter pad landing on foredeck for EC 135 standard, or similar; a spectacular sundeck with swimming pool forward and excellent lounging and dining; and a spa area full beam below deck with a starboard side shell door opening to water level.

Quantum Of Solace is Lloyd’s classed and MCA compliant. She is powered by twin 2,447hp Caterpillar engines giving a top speed of 17 knots, a cruising speed of 15 knots and a range of 7,000 nautical miles at 12 knots, thanks to a notable fuel capacity of 204,000 litres.