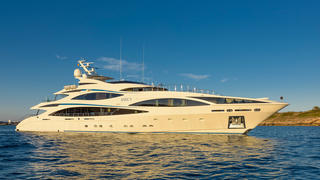 The 47 metre motor yacht Africa, listed for sale with Burgess, has been sold with the buyer introduced by Marine Marketing in Greece and Pivatus in Croatia,

Built in aluminium by Italian yard Benetti to a design by Stefano Natucci and ABS classed, she was delivered in 2010 and has had only two owners since new. A warm, welcoming interior by Francois Zuretti accommodates up to 12 guests in six cabins consisting of a main deck master suite, a VIP suite on the bridge deck, two doubles and two mirror-image twins, all with entertainment centres, Sony television screens and en suite bathroom facilities. In addition, there are quarters for nine crew.

The main deck saloon is open-plan with panoramic windows giving excellent views, a L-shaped seating area to port with a low coffee table, library and full bar. To starboard is an entertainment centre including a 48 inch Sony Bravia plasma television screen and a stereo surround sound system. Forward is a formal dining area with upholstered seating for up to ten guests.

The aft deck is covered and has a dining table that seats ten guests on chairs and a bench seat, offering an excellent space for al fresco cocktails and convivial dining.

Upstairs, the large skylounge has an L-shaped bar with an ice maker to port, while to starboard is an L-shaped settee facing an entertainment centre including a 32 inch Sony plasma television screen. Sliding glass and stainless steel doors lead out to the upper aft deck with a table and built-in upholstered seating for up to ten guests to enjoy the outdoor fresh air.

Twin 3,647hp MTU diesel engines give her a range of 3,400 nautical miles at 12 knots and she is fitted with Quantum zero speed stabilisers.