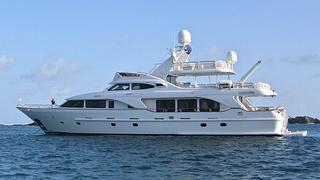 Neal Esterly at Fraser Yachts gets in touch to say he's closed on the sale of his central listing, the 30.48m motor yacht Keiki Kai with Oceanstyle introducing the buyer.

Built by Benetti in 2005 to Lloyds class and with an exterior by Stefano Righini and interior by François Zuretti, she sleeps eight guests in a master, VIP and two twin staterooms.

Keiki Kai has an innovative six deck layout usually found in much larger yachts and her twin 1400hp Caterpillar engines give a cruising speed of 14 knots and a range of 2,100 nautical miles at 10 knots. Keiki Kai is fresh from a major refit including complete new exterior paint and Lloyds certification renewed, ready to be enjoyed by her new owner.

Says Neal: 'Oceanstyle did an excellent job in presenting this beautiful Benetti Tradition to South American clients and did a very efficient closing. The new owners hope to replicate the once in a lifetime two year family cruise that the sellers had done.'