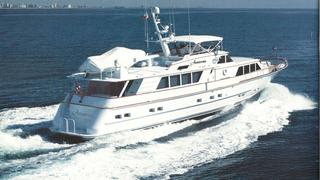 Adventurer was built in 1985 for experienced Burger owners. The design team of Jack Hargrave, Jack Bursack, and the Burger Boat Company produced a comfortable yacht for family cruising, both inside and out. In 1998, one of the original Hargrave architects was called upon to update the design, resulting in a well-executed aft-deck extension. Adventurer sleeps eight guests in four staterooms plus crew quarters and a captain's cabin and her flybridge features a Bimini top.