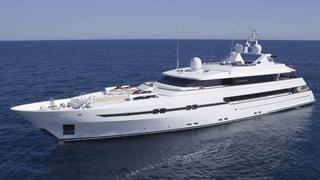 For the past couple of years Burgess have announced a major sale on the eve of the Monaco show and this year's no exception as I'm told they closed on the sale of the 49.85m motor yacht La Naturalle Dee on Friday afternoon with no other brokers involved.

La Naturalle Dee was built by Turkey’s Proteksan Turquoise yard in 1994. With an exterior designed by Dubois and a Donald Starkey interior, she has large, spacious decks and generously-appointed, flexible accommodation for 12 guests in a master suite, VIP stateroom, two double and two twin cabins.

La Naturalle Dee has a longstanding, strong charter reputation and is fitted with twin 765hp Caterpillar engines giving her a range of 3,800 miles. Her asking price was $7.9 million.