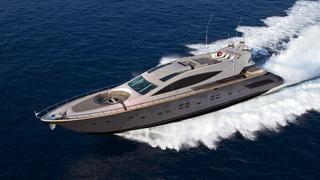 Andrew Noble at Carine Yachts reports that he has listed for sale a 31.1 metre Cerri 102 FlyingSport motor yacht.

Built by the Italian yard Cerri Yachts, she was delivered in 2013 as the third in the FlyingSport line, a concept introduced as far back as 2004 and now reaching its ultimate evolution.

The yacht features a roomy saloon including a conversation area with sofas, a large pop-up television set and a central dining area seating 10 guests. Outside, the 28 square metre flybridge hosts a second pilot station, an extendable dining table to stern, a barbecue and a large sunbathing area.

The owner’s suite is on the main deck and the below deck area has been rearranged following the wishes of the owner: it now features two VIP staterooms with double beds and full en suite facilities, and both staterooms can be accessed via the staircase from the main deck saloon.

Twin MTU 2600hp engines and ZF Searex surface drives power the yacht to a cruising speed of approximately 30 knots with a top speed of 40 knots.