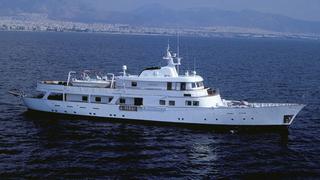 News of the 250th sale of 2011 comes from James Auld at Edmiston & Company who tells me that he has sold the 45.65m motor yacht Beluga in an in-house deal.

Beluga has been owned by the same family since her build by Japan’s Ishikawajima-Harima yard in 1968, with refits in 1980 and 2006. ABS classed, she has a sumptuous Jon Bannenberg interior for 10 guests in a master suite, two double and two twin staterooms.