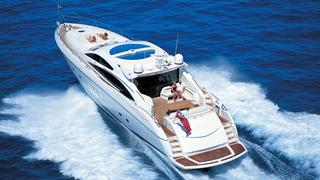 News in now from Harry Bristow-Holmes at Sunseeker London of a currency switch from Sterling to Euros and consequent £133,000 price cut on the 24.97m motor yacht Champneys.

Sleek and striking, Champneys is an excellent white-hulled example of a Sunseeker Predator 82. Launched in 2006, she is probably one of the only 82s on the market to be retrofitted with TRAC zero-speed stabilisers.