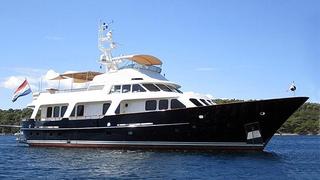 Built in 1990 as one of the yard's Moonen 85 series, she boasts an impeccable pedigree, having been owned by the Dutch royal family. Accommodation is for eight guests in four staterooms and twin 301kW MTU engines give her a cruising speed of 10 knots.