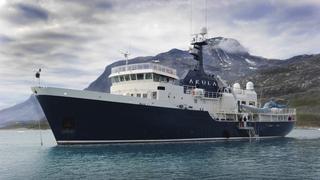 The 59 metre motor yacht Akula has had a central agency change and is now solely listed for sale by Alex Busher at Edmiston & Company.

Akula was built in steel by Dutch yard Amels and delivered in 1974 as a pilot vessel for the Dutch Navy. She was converted into a superyacht by Vosper Thornycroft in England in 1999 under the supervision of BMT Nigel Gee, at which time a helicopter deck and hangar were also added. A further exterior and interior refit took place at La Ciotat during 2008, with a complete engine overhaul in 2010.

Three Deutz 600hp diesel electric engines connected to a single screw propeller give Akula a cruising speed of 10 knots and her rugged build quality makes her capable of worldwide cruising. In addition, she is equipped with Vosper stabilizers that assist rough weather helicopter operations allowing comfortable landings in up to Force 6 weather conditions.