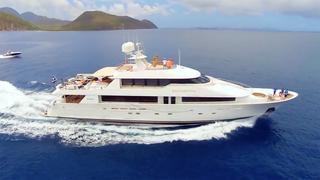 The 39.62 metre motor yacht Redemption, listed for sale by Mark Osterhaven at Worth Avenue Yachts, has been sold and renamed Kaleen IX with Bob Cury at RJC Yachts introducing the buyer.

Built in GRP by US yard Westport to a design by Gregory C Marshall, she was delivered in 2004 as hull number eight in the Westport 130’ series. Accommodation is for 10 guests in five well appointed cabins consisting of a master suite, two VIP suites and a pair of port and starboard twins, all with televisions and en suite bathrooms.

Extensive deck areas allow for al fresco entertaining and dining on the large aft deck and flybridge. The aft deck comes complete with a teak dining table and chairs, built in upholstered seating, a bar with three bar stools, a fridge and a 37 inch plasma television screen. The flybridge has built in seating and large sun pads along with two 8’ teak sunshade umbrellas.

The saloon is warm and welcoming, with comfortable seating, cocktail tables, a wine cooler in a custom cherry wood cabinet and an entertainment system including a 50 inch Samsung LED television screen on an electric lift system. Forward is a formal dining area with seating for 10 guests.

She recently completed a refit at Bradford Marine in Florida. The refit included painting a majority of her top sides, new carpeting, all new exterior cushions and several new air handlers. She is up to date with all mechanical servicing and has been maintained with an open cheque book by a knowledgeable owner and crew.

Redemption was asking $7,450,000 and will now undertake a further major refit in order for her new owner to cruise on her this autumn.