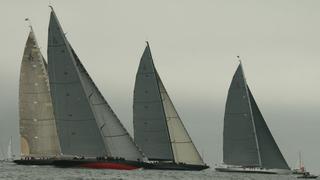 The first race in the Falmouth J Class regatta took place yesterday in a light and variable wind and was won by Ranger. 'We got a good clean start going at full speed,' says tactician Godfrey Cray, 'and everyone else had to tack away, and that allowed us to go where we wanted to go”. After sailing a lot further out to the left of the course than the other three boats, she soon established a seemingly comfortable lead which she never lost. She won by two and a half minutes but had been nearly six minutes ahead at the first leeward mark. 'The distances were a bit flattering,' adds Cray. 'It wouldn’t have taken much in those conditions for the results to be different.'

Velsheda and Rainbow enjoyed a close tussle all around the course, with the advantage very much going to the latter on the downwind legs. Two minutes behind at the first windward mark just off Porthallow, Rainbow then overtook Velsheda on the long run. They changed places again on the next beat when Velsheda tacked out to sea earlier and immediately benefited from a freeing gust. Rainbow caught up again on the shorter run, and the addition of a staysail allowed her to gain still further on the final short reach to the finish. However, Velsheda finished second – just as she did in her last race in Falmouth Bay 76 years ago to the day – with Rainbow, in her very first race, just twenty seconds behind.

Having been closest to Ranger at the first windward mark, Lionheart ripped her spinnaker almost as soon as it was hoisted. She had another one set within three minutes, but then lost out when she found a hole in the wind. Having nothing to lose after rounding the leeward mark, she tacked out to sea rather than follow the other three into the shore. For a while it looked as if it might have paid off, until a header and a lull condemned her to fourth place.

The race is currently subject to a protest by Lionheart regarding the positioning of a mark.