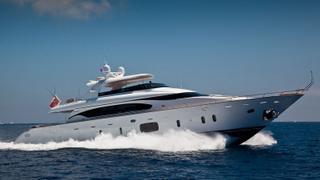 The 28.7 metre motor yacht Aubrey has had a central agency change and is now listed for sale with Andrew Bond at Fraser in London.

Designed by Roberto Del Re, Aubrey was built in GRP by Italian yard Maiora to RINA class and delivered in 2012 as a 29DP model with a cosmetic refit in 2017. Accommodation is for 10 guests in four cabins consisting of a full beam master suite, VIP suite and two twins with Pullman berths, all with entertainment centres, television screens and en suite bathroom facilities. A further two cabins sleep four crew aboard this yacht for sale.

The large main saloon incorporates both lounging and dining areas. An L- shaped, sofa, two leather armchairs and coffee tables are situated close to the electric sliding doors and have direct views of the large screen television set which rises from inside a sideboard on the starboard side. Forward is a formal dining area with seating for eight guests.

Both the aft deck and the flybridge are dedicated to outdoor living, with the flybridge featuring a bar, sun pads, dining table seating eight guests and a hard top to provide relief from the sun.

Twin12V 2000 M94 MTU diesel engines give her a cruising speed of 20 knots topping out at 25 knots and she is fitted with zero speed stabilisers to eliminate roll motion at sea and in port.