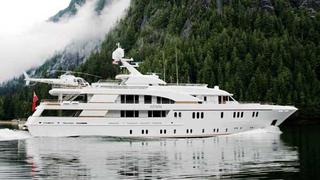 A call to Thom Conboy at Merle Wood & Associates alerts me to the sale yesterday of the 50m motor yacht JeMaSa (now Hadia), a central listing with Peter Croke who passed away last Friday.

As Thom says, the sale marks the final act of Peter's illustrious career.

JeMaSa was built by Hakvoort with styling by Diana Yacht Design and Espen Oeino. Launched in 2006, this superyacht was built to Lloyd's class and is MCA compliant, accommodating 10 guests in a master and four doubles. Helicopter capable, JeMaSa is also fitted with zero speed stabilisers and carries all the necessary extras like a gymnasium and spa tub.