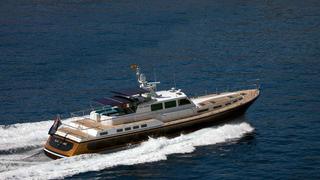 The 25 metre motor yacht Blue Legend, jointly listed for sale by Berthon and Edmiston & Company, has been sold with Sue Grant at Berthon introducing the buyer.

Built by UK yard T. Richardson to a design by TT Boat Designs and Lloyd's classed, she was delivered in 1996 as one of the yard’s Nelson models. In 2006 she was completely rebuilt including an extension bringing her up from 21 metres to her current length. At the same time, her teak decks were replaced, plumbing was upgraded and she had a full repaint. Accommodation is for up to six guests in three cabins consisting of a master suite and two twins, all with en-suite bathroom facilities. There are also quarters for two crew.

The wheelhouse has an interior helm to port with full instrumentation, while aft is a U-shaped dining area to starboard facing an extending dining table and two leather settees upholstered in cream leather along with an entertainment centre including a large flatscreen television. The restful interior has panelling in American white oak contrasted with turquoise carpeting sporting a white trim.

The massive aft deck has a further helm station with port and starboard U-shaped banquettes around two dining tables, providing ample al fresco entertaining and dining for up to 12 guests. A Bimini top over the aft dining and helm area provides protection from the sun. Twin 1,000hp Caterpillar diesel engines give her a cruising speed of 20 knots and a maximum speed of 22 knots.