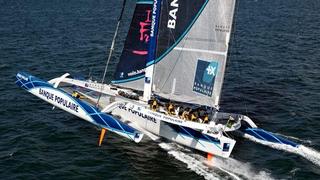 The 40m maxi sailing yacht Banque Populaire V crossed the Equator at 23 hours, 26 minutes and 52 seconds GMT on Sunday night, 27 November, just over five days and 14 hours after crossing the start line in its second attempt at the Jules Verne Trophy.

Team VPLP - responsible for the naval architecture of this trimaran, has expressed delight at this confident debut to the Trophy.

The record to the equator is their first on this circumnavigation and betters the record set by VPLP’s other maxi trimaran Groupama 3 over winter 2009/2010 by 28 minutes.

Company chief Vincent Lauriot Prévost says: ‘Since the last attempt at the Trophy in early 2011, the trimaran has been subject to a campaign of reliability testing for certain specific points and renewed reinforcements that have become necessary since the launch of the boat but, other than that, all the principal characteristics and options have stayed the same.’