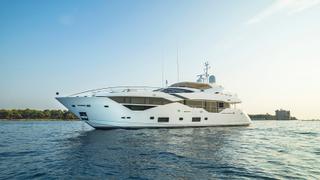 A brand new 35.2 metre Sunseeker 116 motor yacht has been sold by Christopher Head at Sunseeker London working with James Lloyd Jones at Viare.

Built in GRP by UK yard Sunseeker International, this innovative motor yacht builds on the success of the 115 model and was launched earlier in 2017. Accommodation is for 10 guests in five cabins consisting of a master suite on the main deck and four further guest suites below deck, all with entertainment centres, Samsung HD LED television screens and en-suite bathroom facilities. Large windows in the master cabin and cutaway bulwarks flood the yacht's living accommodation with natural light.

The interior of the new Sunseeker 116 luxury yacht is geared for entertaining, with a large main saloon boasting full-height windows, an entertainment centre including a 55-inch Samsung HD television screen and a Sonos sound system delivering on-demand audio throughout the yacht. Forward is a dining room that can be used to host up to 10 guests.

Up on the flybridge, a retractable sunroof covers a lounging and dining area, and a Jacuzzi. The buyer opted for the Sunseeker Platinum Package which includes a hydraulic bathing platform, aft flybridge canopy and a stern canopy. Twin MTU 2,640hp diesel engines give her a cruising speed of 25 knots and she is fitted with Trac digital fin stabilisers.