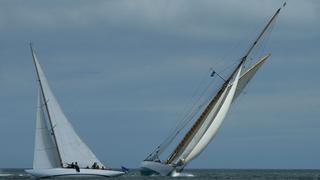 The last race of the Pendennis Cup took place on Saturday in idyllic sailing conditions in Falmouth Bay where the steadily building north westerly breeze – it was a good force five at the finish – was accompanied by a gradually clearing sky. Race officer Peter Craig sent Class 2 on a twenty three mile course by the latter part of which Unfurled had established a good lead. In fact, as she sailed on a broad reach towards the penultimate mark to the north of the Helford River entrance, it looked as if she was comfortably far enough ahead of Mariette to beat her on corrected time, and therefore win the regatta overall.

However, due to what was later described as a ‘navigational error’ she sailed past the mark – crucially leaving it on her wrong side – towards another one further to the south, prompting several other competitors to call Craig to ask if there had been a change of course.

By the time Unfurled’s crew had realised their mistake, dropped the spinnaker and beat back to the mark, they had lost around twenty minutes, and Adela and Breakaway had overtaken her. She did recover to complete a clean sweep of line honours with Adela just half a minute behind, but on corrected time she was sixth. ‘Everyone’s a little bit disappointed but we are all surviving,’ says Adam Bateman, Unfurled’s captain. ‘We’ll live to fight another day.’

Meanwhile Mariette’s fortunes contrasted with those of Unfurled, improving as they did during the course of the race. “Initially the breeze was too light for the sail configuration we had,’ says tactician Duncan Adams, ‘but it was too risky to change it with the forecast for the breeze to come up. But then it did and we sailed a really good second half.’ It was, in fact, good enough to win the race on corrected time followed by Breakaway and the 27 metre yawl Bequia, a result which gave Mariette overall victory in the regatta with Unfurled second and Adela third. As well as winning the Pendennis Cup itself, Mariette was also awarded the St Petroc prize for the first traditional boat.

‘We are absolutely ecstatic,’ Adams says, ‘especially as we were second in both of the previous Pendennis Cups when we were beaten by Adela and Altair. But it was really unlucky for Unfurled.’

In Class 3, Firebrand took line honours again, this time with a good enough lead over Mikado to win on corrected time. This left the two boats tied on six points each, but after the ‘last race’ tie break system was applied, the Little Dennis Cup was awarded to Firebrand.

Subscribe to BOAT Pro to access brokerage sales data and unlimited specs for 12,174 yachts in our Superyacht Directory – the world’s most comprehensive superyacht data.