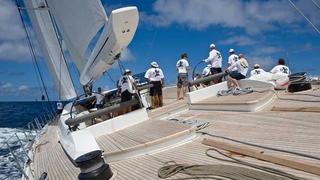 The first Bucket Regatta was held in Nantucket, Massachusetts, in August 1986 with only six competing yachts, and has since enjoyed 25 years of success and growth with a sister event launching in St Barths in 1995.

St Barths is one of the most stylish islands in the Caribbean, with a vast selection of shops, bars, restaurants and hotels to keep visitors to the Bucket thoroughly entertained and looked after. This year, organisers added a new class, Les Elegantes des Mers (classics), to the existing Les Gazelles des Mers (racing) and Les Grandes Dames des Mers (cruising). Local authorities increased the limit of 30 yachts to 40 as the event has been oversubscribed since 2005 and the the Bucket Committee had no problem filling the extra spaces.

Attendees included the 46 metre new-build Pendennis ketch Christopher, which had sailed directly from the builder’s yard in England, along with another beautiful Pendennis ketch Rebecca. Other builders were also well represented, with Alloy Yachts’ latest Kokomo sailing across the Pacific from New Zealand in just two and a half weeks. Holland Jachtbouw enjoyed the presence of two schooners, Windrose and This is Us, while Vitters had a yacht in each class with Marie, Drumbeg and Lady B. Royal Huisman had three yachts over 50 metres, Meteor, Twizzle and Ethereal; and three yachts over 40 metres, William Tai, Hyperion and the J Class Hanuman. Perini Navi was represented by P2, HeliosII, Antara, Klosters, Parsifal III *and the stunning 88 metre *Maltese Falcon.

In typical Caribbean style, the wind was consistently good for all three days, blowing at 15 plus knots, giving the yachts some excellent sailing conditions to enjoy. The race course on Day One was around the island anti-clockwise, with different length courses for each class.

The well-organised staggering of start times meant all yachts approached the finish line at similar times. My first day’s sailing was on the last yacht to start, Leopard, in the hands of the highly experienced captain Chris Sherlock. We enjoyed a superb day, passing 28 yachts to finish 12th. The winners for Day One were all new to the Bucket. The Hood-designed William Tai took first in Les Grande Dames, with Marama winning Les Gazelles and Marie taking line honours in Les Elegantes.

One of many highlights this year was a daily air show, organised by the owner of Marie, who brought four original World War II fighter planes down from Texas. The planes flew just 30 metres from each other at times, diving and spinning, keeping spectators enthralled.

Day Two’s course took superyachts around some of the scenic volcanic rock formations along the north west side of the island.

I enjoyed a great day’s racing on board Kokomo. The crew did a superb job hoisting and furling their highly impressive spinnaker – the world’s largest – on the downwind legs. After a few tweaks to the start times a new group of winners emerged: the 30 metre Swan Virago taking Les Gazelles, Blue Too topping the Les Grandes Dames and Rebecca winning Les Elegantes.

Day Three was another round-the-island race, this time clockwise. I had a wonderful time on board Rebecca, and was impressed by captain Sparky Beardall and his crew. That day the 45 metre Perini Navi sloop Helios II *won Les Grandes Dames, *Virago again took Les Gazelles class, and the 55 metre Elena of London, a replica of the 1911 Herreshoff schooner, topped Les Elegantes.

Back on the dock for the prize giving, owners, guests and crew gathered to learn the overall winners. Congratulations went to the 37 metre Sparkman & Stephens ketch Axia, victorious in Les Grandes Dames class, Rebecca for winning Les Elegantes, and Virago taking the trophy in Les Gazelles... and sailing away with The Bucket itself!