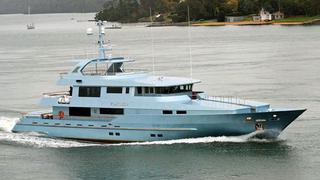 SuperYacht Technologies sues for commission on sale of Platinum

Tony Hashfield of SuperYacht Technologies in Australia is facing one of a broker's worst nightmares as his firm takes legal action to recover the commission they believe is due on the sale of the 38.3m motor yacht Platinum.

According to yesterday's Herald Sun newspaper, Tony's firm was contracted by Jack MacKeddie of MacKeddie Marine who built this superyacht to sell the boat. Tony had been involved in arrangements for Australia's second richest woman, an iron ore heiress, to go on a sea trial in the Whitsundays last September. She is said to have verbally agreed to buy the boat, but asked for time to sell the yacht she owned, the Austal 58.9m Outback.

Mr MacKeddie terminated the SuperYacht Technologies contract the next month, saying he wanted to take it off the market. It's claimed he did this in a bid to escape paying the 10% commission fee.

Outback was sold in July this year. Platinum was then bought and registered in the buyer's name on September 10th 2010 - eleven months after the broker contract was cancelled. However, Section 9b of the SuperYacht Technologies contract states: "If this agreement is terminated and the yacht is sold within 12 months to a buyer who was introduced to the yacht during the term of the agreement, then the full fee shall be payable."

Mr MacKeddie has until next Thursday to lodge his defence with the court.

I spoke to Tony Hashfield last night who said, "We feel we have a watertight case. The contract is worded that way specifically to ensure our customers can't weasle their way out of paying a deserved commission.

"We have to sue because we are out of pocket by hundreds of thousands of dollars and about 4,000 man hours. As a company, we simply can't let it go: we can't afford to give people a free ride." SuperYacht Technologies and Burgess were joint central agents at the time the buyer viewed Platinum in 2009.