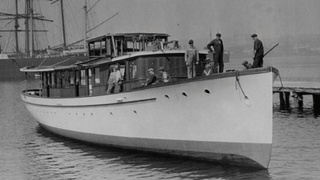 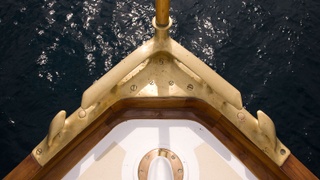 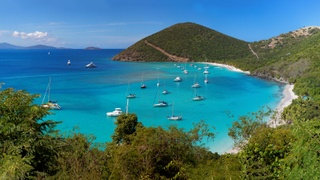 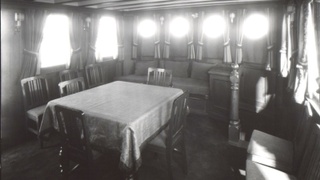 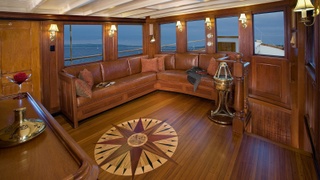 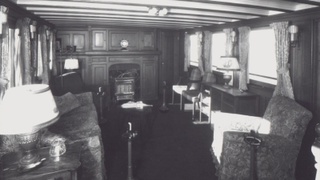 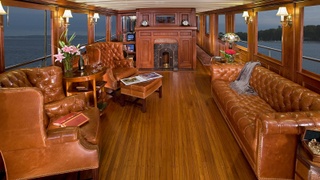 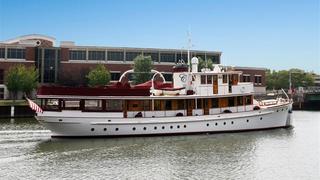 It was a love of collecting, as well as yachting, that led Marty Sutter to take on the glorious 29.3-metre Lake Union-built classic Canim. Having tracked down numerous rare binnacles, steering stations, telegraphs and the like, it occurred to him that “the ultimate nautical antique would be a big, old wooden boat”. And so the search began.

For Sutter, an old wooden boat in the US equalled a Trumpy, and for eight years he and his wife Lisa travelled everywhere, from Connecticut to Chicago, Florida to South Carolina, in search of the perfect craft – and yet none of them passed muster. First, they didn’t make it through Lisa’s unique smell test; she frequently flagged up a musty, damp odour as a result of the wood not being adequately maintained. Second, the boats they were looking at “were not made for the Atlantic Ocean. They were built to go out on the Intracoastal Waterway, or to look pretty at the yacht club, which they did,” says Sutter. The couple were after something altogether more solid.

It was a twist of fate, then, that while they were relaxing in their villa on North Sound in the British Virgin Islands, Canim passed by. “I said, ‘Look at that, Lisa, it’s like a Trumpy on steroids!’” laughs Sutter. He says it was “literally love at first sight” for the couple, and they soon rushed out on a tender to photograph the yacht from every angle. With naval architecture by the late Ted Geary, the beautiful canoe stern only made them more certain that she was the boat for them.

Before Sutter began the lengthy process of trying to track down her owner, he fortuitously caught sight of Canim while flicking through a magazine at the supermarket. The yacht was for sale – but not for two years – when it was due to be sold in Seattle. “I wanted the boat for the Great Lakes, so picking her up there was just not desirable,” says Sutter, explaining that he paid a significant fee to get an option to buy the boat, and to keep her on the east side of the Panama Canal.

In time, however, Sutter says the owner began to have seller’s remorse. “[The seller] made it really difficult for me to do my due diligence. He became quite a cantankerous person to deal with.” Sutter was close to his wits’ end and told his wife he wasn’t sure he could go through with the purchase after all. “You’d better get over this old wooden boat thing then,” she quipped, and Sutter realised that if he didn’t secure Canim, he’d regret it for the rest of his life.

When he finally took delivery in Florida in November, it was too late to take the yacht to the Lakes, and so she was taken over to the BVIs for the winter. She was “satisfactory from a structural standpoint” after having had a refit at Philbrook’s Boatyard on Victoria Island, British Columbia, carried out by the previous owner, but a lot of the brass work had become greenish black having been exposed to salt water and sea air, and Sutter felt her interior was lacking.

“This boat was launched in the golden era of yachting,” he says. “The original owner had owned the Seattle newspaper, he was the commodore of the Seattle Yacht Club… I thought the interior should be the belle of the ball, but she wasn’t. ”The priority was the forward section of the saloon, where Sutter found “plywood with cheesy carpet tacked over it” rather than the teak sole he had envisioned.

One of his biggest learnings from the refit is that his initial misgivings over having the work done in the BVIs were totally unfounded. “My fear was that it would cost me twice as much as in the United States, and that the quality wouldn’t be half as good,” he admits. “But I quickly found out that when you have a classic, historic boat like Canim, it doesn’t matter who has something to do with it – they all want to give it their best.”

For the Burmese teak sole, for example, every plank was bent “using rags and spit and the palms of hands”, rather than using boxes pumped with steam and machines to bend them, as is common practice in the US. Every board either side of the king board in the centre of the sole was perfectly matched to give a mirror image effect, and each of the 11,000 bungs that cover the screws in the wood matches the grain on the plank it sits in exactly. The Dutchman running the project even created a beautiful inlaid compass rose made from eight exotic hardwoods at his own cost, in order to leave his thumbprint on the boat.

“It’s been a constant refit,” says Sutter. “Given that Canim is wooden, she needs to stay in water, so we can’t really haul her out and let her sit in a yard for two years doing everything we want.” The best thing any owner with a similar yacht can do is make continuous improvements, Sutter says. “And if you’re hands-on on a regular basis, then it’s easy to find better ways of operating her and maintaining her.”

These continuous improvements aren’t minor, either. They range from putting a custom-made table into the saloon to match the dining table on the fantail, and changing interior lighting to give more of an art deco look, to replacing more than eight decades’ worth of radar equipment in the pilothouse. “As long as it was working, it seemed fine to me, but someone convinced me that if we put modern electronics on board, I’d not only have better kit, but better visibility, because I wouldn’t have all these boxes blocking my view,” says Sutter, “and that was exactly correct.”

Perhaps the most significant change to Canim has been the work done to the vast amount of brass on board. Initially, keeping everything shipshape and shiny proved to be an endless task for the Sutters. “At one point when friends, family members, anyone else wanted to be part of the life of the boat, the first thing we’d ask was, ‘Well, can you polish brass?’” laughs Sutter. “All kinds of people polished away to earn their right to a ball cap or a T-shirt with Canim on it.”

Sutter finally found the answer to all his problems after meeting Gary Norton, the owner of Freedom, who had previously owned Canim twice. Sutter couldn’t help but notice that the brass on Freedom was as bright as a button. “I asked him what product he was using to protect it, and he said he’d gold-plated it,” says Sutter. “I’m a chemical engineer by training, so that made sense to me, because gold doesn’t tarnish. So I said, well, how much did it cost?” Disappointingly, the answer was unenlightening. “Not as much as you’d think,” was all that Sutter could glean.

And so he began sending tarnished stanchions off to five different vendors to have them gold-plated. Only one came back a warm honey shade, rather than a greenish yellow, during which time a worker at Southwind Marine in Milwaukee who knew Sutter and Canim had worked out how to do it himself.

Then followed a three-year plan, whereby different sections of the boat were gold-plated during each off-season. Everything, including the portholes, which had to be taken off the boat, is now gold-plated, with the exception of a few pieces of historic value – the original yacht’s bell, which reads “Canim, Seattle, 1930”, the horn and floodlights. Today, there’s no more slavish polishing to be done. “Whenever it rains, you just have to wipe it down and it stays shiny all the time,” says Sutter. And the cost? “Well, not as much as you’d think,” he laughs.

As work continues, Burger, in Manitowoc, Wisconsin, is where Canim goes when she needs to be hauled out. “Howard Meyers, the owner there, has been amazing,” says Sutter. “Due to my previous ownership of the historic Burger yacht Chanticleer, Burger makes us feel as though Canim is an extended part of the family.”

What has now been a 14-year project continues to roll on, and today Sutter’s main priority is, what happens next? “Not a month goes by when we don’t have a family conversation about how to make sure Canim reaches 100 under our control,” he says – the yacht is now 89 years old. “Right now, we’re thinking of donating her to a charitable organisation, like the Great Lakes Historical Society or something, along with a grant to allow them to continue to maintain the boat in the manner that we do.”

For, as with his rooms full of antique collectables, it’s the history element that matters most to Sutter. Buster Keaton and entrepreneur Clessie Cummins both owned Canim at one point in time, while Hollywood royalty Julie Andrews and Anthony Quinn also chartered her. “We sit at the fantail and just think of all the stories that were told and created here and think, jeez,” Sutter enthuses. “You just can’t capture that in a new boat – even though I love them – and to be a part of that evolution of yachting is unbelievably fulfilling.”

So has he finally found the antique to top all antiques? “Ha! No,” he laughs. “I’ve got enough pieces to fill 12 Canims! It’s borderline obsessive-compulsive disorder, but it is what it is. I’ve just taken delivery of a binnacle that has three dolphins coming out of the water holding the main case. It’s quite spectacular.”