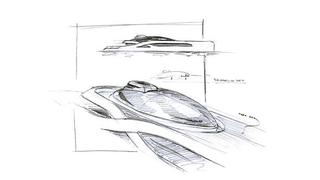 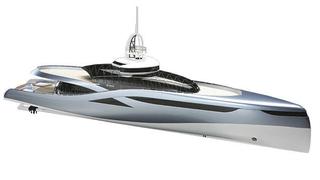 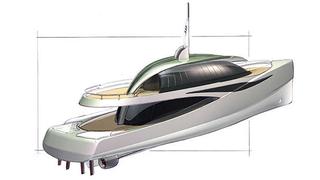 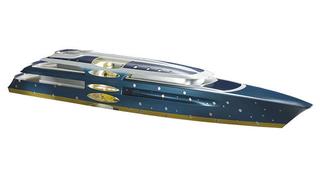 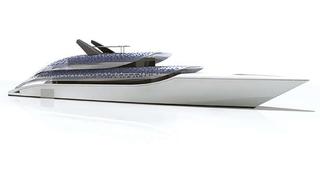 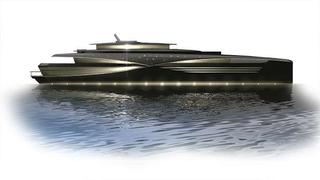 Naval architect Frits De Voogt once had a reputation as the most intractable Dutchman in the yachting industry, which is probably an inaccurate characterisation. What impatient youth would call stubbornness, De Voogt considered responsibility, thoroughness, reason and balance.

Although he designed yachts for the world’s most fashionable people, he was not one to jump on fashion trends. New technology would have to prove itself before it appeared on a Feadship, because it was not policy to use its customers’ money for experimentation.

It still isn’t. How, then, has Feadship put yachts the likes of Predator on the water? The answer lies in the De Voogt design office, now headed by design manager Ronno Schouten.

For five years running, that office has been presenting ‘Future Concept Feadships’. They are unique projects taken from the concept through engineering stages and presented with a model and documentation.

‘If we are doing a new concept for an owner, it will be four years before it is finished and presented to the market as a completed yacht. That is too long to get a reaction to a design or an innovation,’ Schouten says.

‘The main reason we began presenting these concepts was to inspire clients to do different things. Some know exactly what they want, and that’s all right. But there is this other group, perhaps new to yachting or they don’t want the traditional type of boat and are open to new ideas.

‘We have discovered that it gives us a lot of feedback at the shows and at client meetings, and helps our guys understand them.’

By ‘our guys’ Schouten means the 80-strong workforce at De Voogt, a mix of designers, naval architects and engineers.

The first project was X-Stream in 2006, a 73 metre yacht that rocked Feadship’s world. The thought behind the name seems obvious, but peeling back the layers of this project shows that the De Voogt office was engaged in studies of the ‘enlarged ship’ concept axe or ‘X-bow’, glass panels and diesel-electric pod propulsion.

These studies were not simply for intellectual exercise, but part of a larger real-world curiosity about increasing speed by chasing reduced resistance and about limiting motion in a moving vessel.

The team discovered that the enlarged-ship concept hull (longer forward of maximum beam) reduced resistance up to 28 per cent with a length increase of 25 per cent. While this limited accommodation (think of a 60 metre Feadship in a 73 metre hull), vertical motion was reduced 20 to 25 per cent. So where did this exercise take them? Many of the findings were applied to Predator.

The following year, De Voogt presented F-Stream. It was a 55 metre concept that kept some of the details of the hull developed with X-Stream, but applied them to higher speed requirements and the fact that motion sensitivity correlates to age and gender. There is a higher likelihood of seasickness in women, but in both genders, there is a much higher susceptibility to mal de mer in people under the age of 20.

Continuing with the youth concept, it turned to issues of speed, analysing a new development called the Voith submerged water jet: a system comprising a special propeller surrounded by a collar to concentrate its thrust, which was originally designed for ships operating between 20 and 40 knots.

With F-Stream, De Voogt investigated solar cells and found the best systems about 60 per cent efficient. With Aeon, it looked at multiple sources that could provide sufficient sustainable power for transatlantic range. The office came up with a package wrapped in a 75 metre yacht.

‘Finding clean and renewable energy sources ranks as one of the most challenging problems facing man,’ says Schouten. ‘The problem to solve is how to both minimise emissions and develop new energy sources.’

Its advanced system utilises green power sources such as biofuel and solar energy. The propulsion is entirely electric – no combustion engines. A reformer converts biodiesel to hydrogen to be converted into electricity in fuel cells. In the process, De Voogt found ways to re-use the waste products: heat, carbon dioxide and water.

The De Voogt team also tackled storage issues; tanks to store hydrogen are heavy and compressing the gas requires energy. Hydrogen turned into batteries is even more inefficient by weight. The solution emerging was battery power for normal day cruising and synthetic diesel generating heat for a steam drive system.

It was Aeon’s reduction of hotel loads and reusing waste heat to operate within a limited power budget that had a lasting impact. De Voogt even learned how to reuse the exchanged air from an air-conditioning system to pre-treat fresh air, install frictionless pumps in the chillers, and use a cold slurry tank to reduce peak loads. The total energy saving is 40 per cent.

In 2010, De Voogt dialled it up a notch with Breathe, a design that uses bio-mimicry to reduce energy consumption.

‘Nature’s inventions are on many occasions far more efficient that anything humans can devise,’ Schouten says.

The goal was to show how sustainability could reduce a yacht’s operating costs.

Starting with the ventilation, the contrast of the darker superstructure shells over the light hull creates variations in air temperature, which in turn creates air current. On Breathe, the air heated by the dark shells rises, drawing cool air from the water surface across the deck, cooling the walls of the superstructure, while the shells also form a surface for flexible solar cells. Combined with the heat recovery of Aeon, the design reduces air-conditioning loads by 40 per cent.

By making long, narrow stabiliser fins with bumps on the leading edge, the fins function over a larger angle without stalling and give more lift at low speeds. By putting the fins aft, they assist a pod drive unit in steering the ship. At anchor, they do not rotate but flap up and down. At high speed they present much less drag and can be folded out of the way entirely.

A wedge hull shape combines the long bow with a wave-dampening after body. The combination results in a reduction of trough and transom waves – and 20 per cent less resistance at 14 knots. What will they think up next?

The 2011 project, Qi, was designed to provide the ultimate holiday. ‘What do you do in your free time? You might not even be thinking about a yacht, but what if the yacht allowed you to do exactly what you want to relax?’ says Schouten.

Qi is named after the eastern concept of a circulating life-force or energy flow that permeates all of creation. The aim of the design is therefore to blend a sense of power with a feeling of peace. The interior is centred around the glass ‘energy tower’ that rises through all the decks, and is topped by the sundeck spa pool with a central camp fire. Amidships the hull doors open up to reveal a gigantic spa, while the port-side gym offers panoramic views.

‘The target length is 50 to 55 meters and is something of a transformer. It changes with uses, with environments and even from day to night. It adjusts to family use, to parties, to business, everything you can do on a boat – and everything we have learned so far.’

The forward deck is particularly flexible. When in use as a viewing deck two balconies can be turned out to offer panoramas over the bow. Alternatively it can be opened up with fins to double its size and create ample space for a party. It can also serve as a gigantic cinema with a 180-degree projector screen. In colder climates the deck can be enclosed by sliding glass windows.

In terms of technology, Qi brings forward the propulsion system developed for Breathe: a single propeller in line with an azimuth stern thruster. The design’s flexibility is again apparent in the three propulsion modes that are possible: diesel-electric mode, where the generators provide clean, quiet operation up to 12 knots; range mode, where only the medium-speed diesel engine is operating; and full-speed mode, where both the main engine and the generators are combined for maximum power.

It is interesting that Frits de Voogt’s famous ‘stubbornness’ has ultimately yielded such bounteous flexibility; proof that Feadship’s designers value not only responsibility, thoroughness and reason, but also imagination and originality. A fine balance indeed.

Musashi - the yacht where industrial design meets a Japanese aesthetic