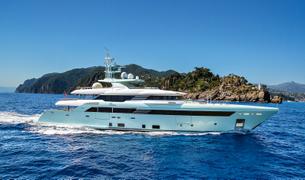 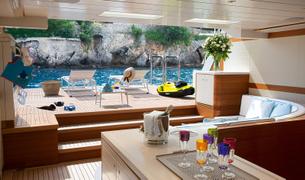 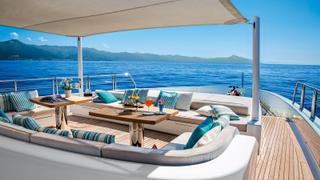 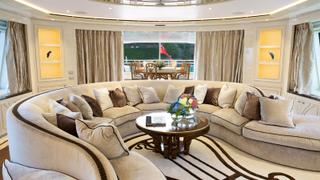 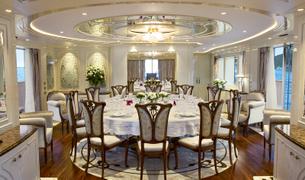 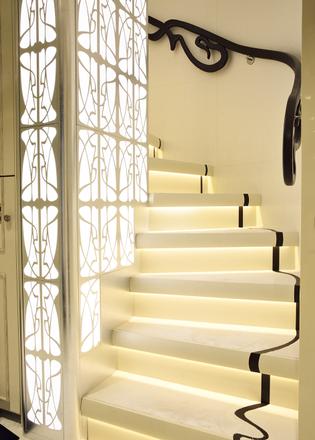 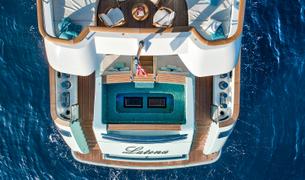 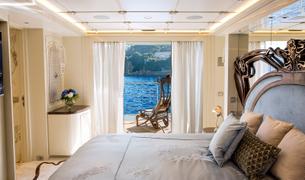 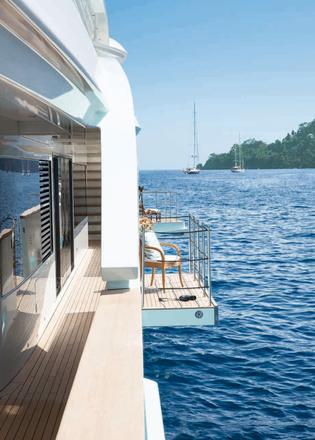 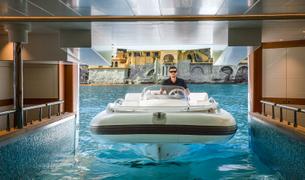 Home from home: How CRN created a family haven on board 50m Latona

A family recreated the ambience of their dream house on board the 50 metre CRN Latona. Clare Mahon untangles a story with a happy, homely ending.

The story of the newly launched 50 metre CRNLatona intertwines mythology with recent history, and nostalgia with innovative technology. The strands of its narrative twist and overlap like the sinuous lines of the art nouveau masterpieces that inspired the yacht’s interior décor.

Greek myth tells the story of a young girl, Leto, whose beauty caught the roving eye of the most powerful of all gods, Zeus. When the girl fell pregnant, Zeus’s wife Hera caused all the lands to shun her. Displaced, hapless and exhausted, the girl roamed the Earth until she found a floating island: since it wasn’t attached to the ocean floor it wasn’t affected by Hera’s curse. There she found rest, gave birth to twins and later became the goddess of motherhood. “When we were naming our yacht, we chose the Latin version of her name, Latona, because it is softer-sounding. We think of this yacht as our families’ space of welcoming comfort, almost like a mother’s embrace,” says one of Latona’s owners.

Latona is co-owned by two families who commissioned her together and split their time aboard. “Usually, one family at a time is aboard, but sometimes we overlap,” says one of the owners during my visit. “We’ve been friends since we met at university,” adds his wife. “And we are business partners now,” he concludes. The impression is that aboard Latona four people can finish each other’s sentences in perfect harmony.

The couples’ co-ownership experience is well tested: over the years they have owned a Ferretti 750, a Ferretti 870 and a Riva runabout, among others. “In 2013 we began talking with CRN about a new build. At the same time I was restoring my dream house, a historical property that once belonged to a member of the Romanov family,” says the owner.

Time passed, but they did not abandon the thought of building a yacht with CRN, and when the shipyard proposed a 50 metre model with exterior design by Zuccon International Project, talks resumed in earnest. And this time the owners knew that they wanted to reproduce the ambience of the home.

“Latona’s owner is an exceptional person,” says Giovanni Zuccon, who co-founded Zuccon International Project with his late wife, Paola Galeazzi. “In my 47 years as an architect and yacht designer I have never worked with anyone who is as hands-on. He is very affectionate, very sensitive and very attentive to detail. We were developing the project for over two years, and by that I mean two people working full-time on this project. We did more than 100 detailed renderings for the interiors so that there would be no surprises.”

While designing the interiors was a painstaking task that challenged both designers and craftsmen, the yacht’s exterior lines were an instant hit. “The owner took one look at my design for an updated version of CRN’s classic Superconero models and said, ‘I will never get tired of looking at this yacht.’ That’s the best compliment I could ever hope for,” concludes Zuccon.

Even before boarding, it’s clear that Latona is a yacht that’s out of the ordinary: her pale-turquoise hull colour was even a matter of intense discussion. “It’s true,” laughs Costanza Pazzi from the CRN design department. “We were pushing for a more traditional tone like white, cream or blue. But the owner, and especially his wife, knew exactly what they wanted and they stood their ground. When the yacht was launched I texted them to say that they were right. It’s a really nice, relaxing shade and looks beautiful in the water.”

Opulent materials and touches like double curtains give the space a cosy, homely atmosphere

The turquoise tone is picked up in the aft deck spa pool that has a glass back and two glass panels on the bottom. “The panels are skylights to the beach club below, but my son-in-law has taken the most extraordinary pictures of my grandson playing in the pool by shooting up through them. You would think they were photos taken by a fish,” says the owner’s wife.

Speaking of fish, the aft deck is decorated with colourful panels of underwater scenes in curved art nouveau frames. On closer look they reveal themselves to be in an unusual material for yacht décor: stained glass. The main deck aft is a space for splashing in the pool and lounging, and the main deck saloon is entirely dedicated to formal dining. So perfect is the art nouveau style that it could be a period piece from 1905 done in a cream and brown palette. The same curvy frame with a flower at the centre from the stained-glass panels is repeated in the all-around wooden panelling, and a curve that recalls a treble clef in musical notation is inlaid in the stone floor and picked up again in the mirrored ceiling. “The owner was so involved in the design process that he visited the shipyard at least 15 times,” says Pazzi. “He wanted exactly that curve in exactly that shade of dark chocolate brown.”

Opulent materials and touches like double curtains give the space a cosy, homely atmosphere that can make you forget you’re on a yacht, even when the two side terraces are open on to the view. The owner’s suite is preceded by a dressing room with closets, a study and what could be every smoker’s dream: a fumoir with its own large window. “I used to smoke cigarettes, but I smoked too many, so I switched to cigars,” says the owner with an apologetic smile. “Soon I was smoking too many cigars too, so I switched to a shisha. But I still enjoy a cigar now and again.”

The owner’s suite is an oasis of softness. “I like to think of the yacht as our cloud,” says the owner’s wife. “And I love getting out of bed and taking a dive off the side terrace first thing before breakfast,” says her husband.

Breakfast is usually enjoyed as a family on the upper deck aft. The long teak table there has a lattice of pieces that can shift slightly as the wood expands and contracts in varying conditions of humidity – a masterful work of carpentry that well represents the level of craftsmanship found throughout the yacht.

The upper deck saloon is really a music room and is one of the areas the owners spent most time designing. “During the worst of the crisis I would try to think about something else so I would draw the layout of this space. I have a natural feel for volume and wanted to use this area to the best effect. By designing a curved couch and placing it diagonally, there is plenty of room for a grand piano. And the way the backrest is designed, you can use one end as a tête-à-tête,” he says.“Our grandchildren love taking all the pillows off and running along it, then piling up the pillows to build a castle,” his wife adds.

Even though the yacht’s décor is formal with lavish use of precious and delicate materials, the owners large and small seem to have a playful streak. It’s not surprising, then, that the area the whole family enjoys best is the beach club. The transom opens to become a terrace and can be used for sunbathing or for launching any number of the yacht’s ever-expanding cache of water toys.

A comfortable sofa faces aft so that it’s easy to keep an eye on what’s going on in the water. A beautiful steam room is fully lined in mosaic with a Grecian wave motif with dolphin and sun details, and there is an area with gym equipment too. But the best feature of this space is the float-in tender bay that doubles as an indoor pool. When the tender is launched and the side-opening hull door is closed, the children have a large pool to swim in. When the hull door is open, the tender can motor in to an ultra-luxurious garage shimmering in gold and turquoise mosaic.

“In 50 metres we have everything,” says the owner. “I really couldn’t ask for more. All the cabins are fantastic and we have the services of a small, eco-friendly village.” It seems they have found their floating island of peace in Latona.

A custom fit: How 74.5m Elandess sprang from a blank sheet of paper