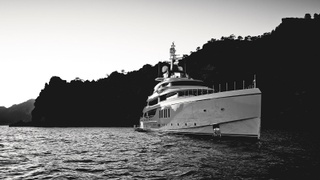 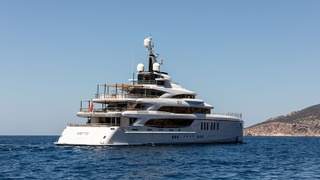 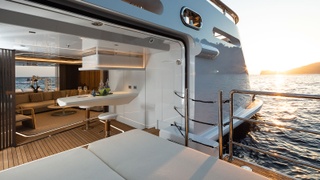 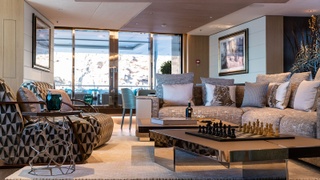 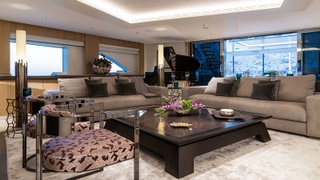 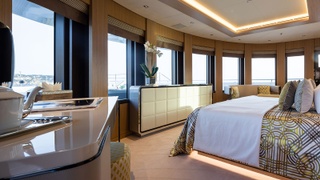 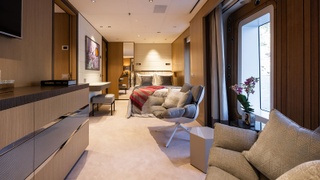 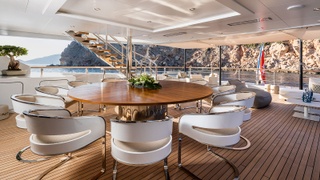 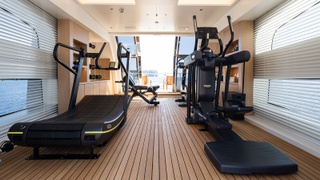 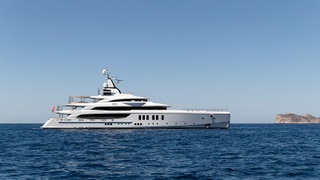 Metis may be based on Benetti’s 63-metre platform, but her owner’s request for an extra deck has made her one of a kind, learns Caroline White

Among the phrases most likely to make your project manager weep during a build, “Let’s add another deck” rates highly. On the 63-metre project that became Metis, not only did Benetti’s Marco De Cosmo hold it together when a client bought the partly built yacht and made such a request, but the yard, together with designer Giorgio Cassetta, reacted with ingenuity to fulfil the wish in some style. Glimpsing the lines of the finished superyacht at anchor, you would not guess that several months into her build she was a radically different boat. And that’s just what you can see from the dock.

Metis is based on the same platform as 11.11, the 63 metre launched in 2015 for British businessman Nick Candy, although the two yachts differ significantly inside and out. “One of the most important differences between the two projects is that on 11.11, the aft part of the lower deck had the garage,” says De Cosmo. “In this project the garage has been moved forward and on to the main deck. Because it’s at a higher level than the waterline, it improves the launching and the retrieval of the tender, whatever the environmental conditions – you lift the tender with a crane and it clears the waves.” In place of the aft tender garage, a beach club opens up with terraces port and starboard, as well as a long swim platform aft.

With the fundamentals of the GA set, the yard engaged Bannenberg & Rowell to pen the interior. They put their own spin on the design with several asymmetric spaces: a glance at the GA shows that the interiors of the main saloon, upper saloon and beach club lounge have been rotated 30 degrees. “It does various things,” says company leader Dickie Bannenberg. “It’s less formal and less rigid; it makes those spaces and views a bit more appealing, a bit more relaxed. And it gives you slightly different aspects when you’re looking out, so you haven’t just got that conventional fore and aft or port and starboard. It changes that dynamic a bit.”

While Metis was the studio’s first spec project for Benetti, they had worked on several such projects for Heesen and they knew the drill. “Architecturally and material-wise it’s a fairly knocked back, consistent palette throughout,” says Bannenberg. “That pale oak, offset with carbon fibre and some interesting stainless steel. It worked as an easy-going palette when the incoming owner eventually did show up – they made no changes to the architectural palette, which was reasonably far advanced.”

The asymmetric upper saloon features a dark gloss grand piano, a silky smoke-coloured rug by Vanghent and glints of steel in the arms of the armchairs and art-deco-esque floor lamps, both by Fendi Casa. The bar, its face sculpted from Bianco Statuario marble and framed with polished stainless steel, is the star of this glamorous space – you can almost hear the cocktails being shaken. The dining saloon a deck below features a pale wood table inset and edged with stainless steel, and Bruno Moinard chairs covered in coffee-coloured leather. There’s also a stunning bespoke wine fridge, wrapped in leather and framed in polished stainless steel with dark oak fascia. Just aft of here, the cosy main saloon is centred by a bespoke coffee table with more stainless inserts, while the arms of the Fendi Casa armchairs are in warm wood. The off-kilter white oak ceiling panels mirror the layout of the furniture below, highlighting the unorthodox “rotated” arrangement.

Wood takes on a major role throughout the scheme, with wall panels of white and smoked oak juxtaposed with cream leather panelling, and the two woods used underfoot to delineate different spaces. There’s bespoke, faceted oak in the upper saloon sideboards, while elsewhere the joinery shows off a recurring stretched parallelogram motif that feels automotive: it features in the pull handles of the asymmetric white oak joinery in the cabins and lobby, in the smoked oak panelling that wraps around the “turbine blade” staircase and in white oak doors inset with grey Texalium (carbon fibre) panels.

The German owner came on board when the lower, main, upper and bridge decks were already penned and built, and he invited Bavaria-based interior designer Birgit Otte to add some touches to this scheme, ranging from fabrics to distinctive decorative elements, such as the suit of Samurai armour standing by the bar on the bridge deck.

He also requested some significant changes to the spaces on board – and Benetti was able to adapt the part-built project to accommodate them. A children’s area was created forward on the main deck; from the central lobby it runs through a starboard playroom to a twin kids’ cabin, complete with a bath in the en suite and an adjoining nanny cabin to port. This is one lucky nanny – not only is there convenient access to the crew quarters through an aft door, but there’s also a comfortable seating area next to a fold-down balcony, as well as decor in line with guest areas. The vast 160-square-metre owner’s suite, forward and one deck above, is also highly individual: “The cabin is split into two areas,” says De Cosmo. “This configuration gives more value to the boat when chartered.” Between the two sleeping areas, arranged forward and aft in the space, lie two dressing rooms and two interconnected bathrooms. The forward cabin gets the plumb view, though – with 180-degree windows looking out over a private bow terrace of more than 100 square metres. With seating and sunpads aft and a touch-and-go helipad forward on a flush portion of deck, this is a flexible space with style.

It is also part of a very conscious effort to maximise outdoor space. “At this length, when you do a three-deck configuration, you always have a problem of small sundecks or no sundeck at all,” says Cassetta. “So the choice we made was to reduce the superstructure’s inside area as much as possible – [the bridge deck] is dedicated only to the wheelhouse, pantry, captain’s cabin and guest staircase that rises here along with the lift.” The rest of the level, which was originally intended to be the uppermost, is devoted to a loungy aft deck of almost 14 metres in length, with a spa pool, sunpads, bar and teppanyaki grill.

The upper deck, one level below, has been built to extend al fresco life beyond the summer months. “Because the owner came from the north, the external area has been fitted with special heaters with a ceramic induction system,” says De Cosmo, “so even if he and his guests decide to have dinner in the external area and a breeze starts to come up, he can still make the area comfortable.”

Which brings us to that extra deck on top. “Before the owner came to the project, the deck did not exist at all, so this structure was designed and built in a short time,” says De Cosmo. “Basically, we had two approaches to quickly satisfy the request. The first was a dedicated building task force committed to the additional deck. This was to avoid stopping the normal work-flow in the production – the other part of the structure was already made, and the whole construction should follow certain steps.” The second task force went to work, with the class society, on ensuring the new weight distribution of the boat would remain safe and seaworthy.

Given the circumstances and restricted timeframe, it’s especially remarkable that the new deck melds so seamlessly into the design. “If I had done this [as part of the original design] this would, of course, have been integrated into the structure and this deck could have sat about 70 centimetres forward of where it is now,” says Cassetta. “The overall height of this thing is just crazy because it is sat on top of the superstructure. I wanted to keep it tiered so it was more like a mast than another layer to the superstructure. And being narrow it doesn’t feel like it’s a total disruption of the boat’s design.” Housing a gym, flanked by dark windows for privacy, plus an open-air yoga deck forward and a staircase aft, its petite proportions and careful positioning do make it seem like an extension of the mast.

At the other end of the boat in every sense, the crew are afforded a decent amount of space forward of the lower-deck guest cabins, the crew mess and the galley. The wheelhouse is completely paperless and everything is doubled up for security and redundancy. “Basically it’s equipped like any cruise ship or ferry,” says Captain Frank Hesse. Without external side passages that reach back to the guest spaces on the aft deck, the area allows the captain and crew to get on with the business of navigation without interference. There’s also a neat al fresco seating area forward that doesn’t overlook the owner’s deck below, giving the crew some much-needed outdoor space of their own.

“What did we do now? I can tell you exactly – 7,500 nautical miles this summer,” says Captain Hesse. The boat has also been a valuable ambassador for this platform, with three more sold and due to launch in 2021 – more than enough to keep Benetti’s management team smiling for years to come.

Excellence: On Board the Abeking & Rasmussen 80 Metre Superyacht