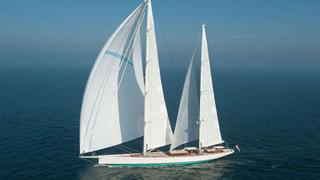 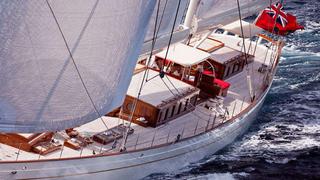 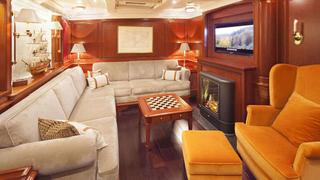 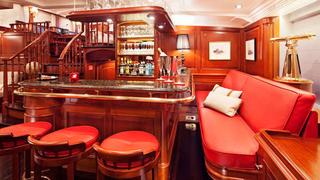 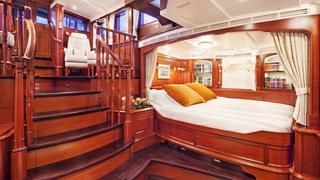 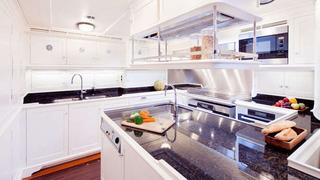 Royal Huisman’s 55 metre ketch Kamaxitha combines classic and contemporary design with a counter stern clearly meant to reference the past and a vertical bow designed to optimise sailing performance and interior space. Her project name was Spirit of Tradition, but it is obvious Dykstra Naval Architects’ designers, and interior designers Rhoades Young Design, have worked hard to go beyond this sentiment, and found ways to expand her sailing performance, notably a hydraulically operated lift keel. The attention paid to this project paid off for Dykstra, as the design house took home the Exterior Design & Styling Award in the sailing yacht category during the 2013 ShowBoats Design Award for Kamaxitha.

Kamaxitha’s owner started out building a classic sailing ketch, but later chose to change his brief after seeing the yacht Hetairos from the same designers. Notes Dykstra naval architect Erik Wassen, ‘While he still wanted a classic yacht, he now also wanted high performance. We started working immediately on the bow, foregoing the classic slant and going with a vertical bow instead, which allowed us to increase the waterline length and add interior volume.’

The relationship between architect and owner appears to have been one based strongly on performance. ‘He listened and followed many of our indications to maximise the boat’s performance,’ confirms Wassen, ‘and he was quick to seize the essence of this project and ask many questions on how best to achieve his objective of a high-performing classic yacht. As for every sailing yacht, the design process is looking for the best compromise – a compromise between available space and amenities, between weight and speed. But in the end once you understand the terms of that compromise you work toward meeting the owner’s expectations. We started from a classic ketch, almost a J class, then during a holiday he visited Hetairos under construction at the Baltic Yachts yard and he returned with different ideas. So the design changed shape to a pilot ketch.’

Dykstra’s working relationship with Royal Huisman remains a strong one, based on years of experience working together. ‘We have done so many projects with Royal Huisman and working with them is always gratifying because they can do everything in house, down to the smallest details,’ says Wassen. ‘This is very important when you build a custom yacht, because the owner and designers tend to come up with new ideas. In this case, the ideas led to many small things that would be difficult to handle if we had to go to a subcontractor, but with Royal Huisman it is not the case. To have all the mechanical systems built a few steps away from the hull is a great resource.’

The yacht’s styling and Rhoades Young’s interior design, while classical, also has many original features. Antique marine items, from paintings to reproductions of 17th Century ship cannon, all work in concert to convey the pleasant feel of a vessel from another time. Midships is the full-beam saloon, which on the starboard side accommodates a dining area and on the port side features a pub-style bar. Toward the stern is a seating area with a spacious L-shaped sofa, table, an armchair, an artificial fireplace and a painting of an antique yacht that retracts to reveal a TV screen.

Forward is a cabin designed to easily accommodate someone in a wheelchair, and reserved for a friend of the owner. It is designed to offer freedom of movement and comfort, including in the adjacent en suite. From this detail and many others on board, such as the cosy saloons, the well-planned accesses and other factors designed to ensure all guests are comfortable, it’s clear the owner is fond of socialising. Across the corridor from this guest cabin are the large galley and adjacent crew mess which, surprisingly for technical areas, fit well within the classical theme. This is also true of the crew area accommodating a small crew of seven, which is located forward. The result is a pleasing stylistic cohesion throughout the yacht.

Toward the stern is the full-beam owner’s suite with a large bed set off to the port side making room for a central staircase to an office inside the deckhouse, which opens onto an outdoor private relaxation area near the lazarette. Inside the suite, on the starboard side, is a saloon with corner office and one of many screens found on board – including one inside the sauna next to the owner’s suite.

The crewmembers and the captain speak warmly about Kamaxitha’s ability during long passages. Says one of the deckhands: ‘It is a very special yacht, so much went into the sailing plan, but the result is extraordinary; we sailed at close to 20 knots and her behaviour was impeccable. The automated system makes manoeuvres easy and intuitive. This means fewer of us on board, and while there is less work involving the sails, there is more to do elsewhere; but navigating aboard Kamaxitha is a real pleasure.’

It is plain that the crew handles the big sailplan with ease, and the short time it takes to switch from engine power to sails is impressive. It’s amazing to see a yacht embracing the wind. Close hauled, Kamaxitha behaves like a small, nimble yacht and reaches 12 knots – matching the windspeed – without hesitation. I am also impressed with her ability to resume course after the tack, again giving the feel of a much smaller and lighter boat.

Looking at the data, seeing her react to the wind and feeling her power through the water, highlights Kamaxitha’s dual personality as both a modern classic and a high-performance yacht. Her lines may hark back to the age of pilot cutters, but she is firmly rooted in the future.

This is story is an abbreviated version from that found in the August 2013 issue of Boat International magazine.