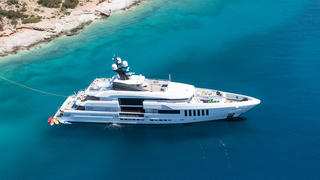 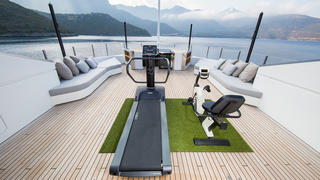 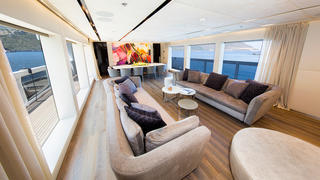 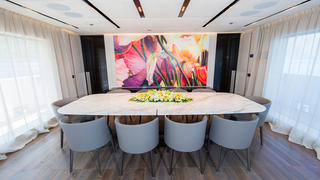 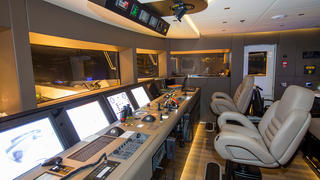 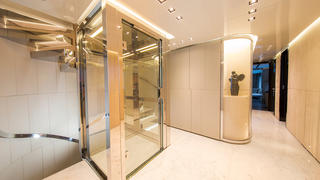 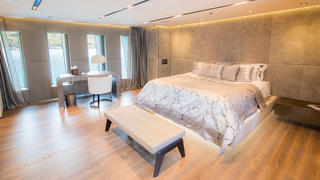 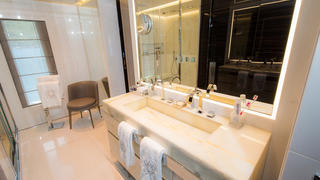 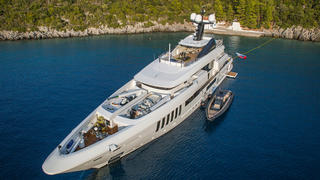 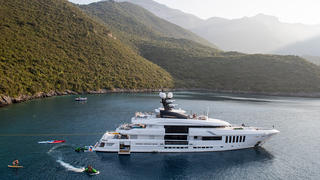 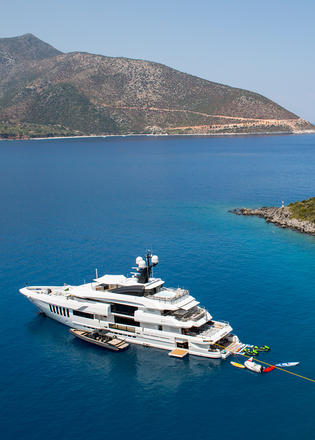 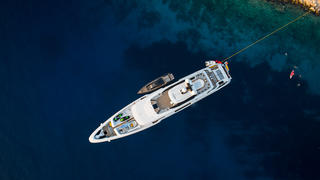 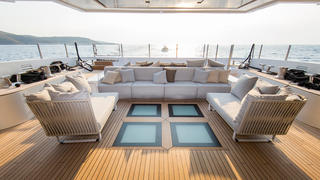 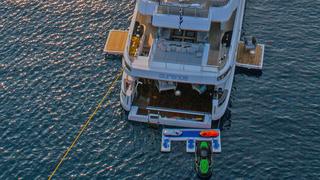 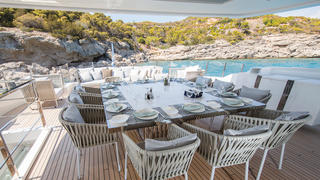 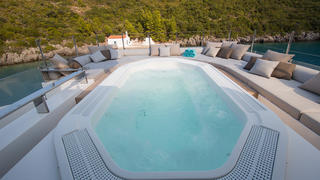 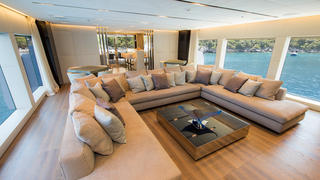 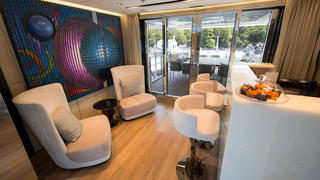 Ouranos may be an unusual name to some, but it is no doubt familiar to those used to chartering in the Mediterranean — and Greece in particular — as this 49.6 metre Admiral is the third yacht to bear the moniker. In Greek mythology, Ouranos is the god that embodies the sky and, by extension, the ancient Greek word is synonymous with the firmament and constellations. So the yacht, with a slender beam, paint as white as the villages that cling to the Greek islands’ rocky shores, and huge signature windows that look out on to the blue sea, is very much her own slice of heaven.

Conceived as the first of Admiral’s C Force series for a repeat client of the Italian Sea Group, Ouranos was always meant to welcome guests. The owner, a family man, uses his boats — the previous one was a 45 metre Tecnomar — for charter primarily and, occasionally, enjoys them himself, says Michel Chryssicopoulos, a partner with IYC, which manages the yacht for charter.

He followed Ouranos’ construction closely in Marina di Carrara until her launch in early spring of 2016. Banking on the yard’s ability to adhere to the delivery date, the company accepted bookings for summer charters. It worked out.

Take a closer look at the Admiral superyacht Ouranos. All photos: Olga Logvina

The yard delivered the boat on schedule and, by the time the Monaco Yacht Show came around, Ouranos had already logged quite a few miles and the generators had worked for 1,200 hours. “It has been very successful and she was nearly fully booked all summer,” Chryssicopoulos says.

Multiple factors contribute to her success. Aside from the professional and enthusiastic crew of nine, now headed by a new captain with 15 years’ experience in the Med, Ouranos has lots to offer to charter guests, he says. First, her styling, by Jure Bukavec of Uniellé Yacht Design, is eye-catching. A young designer from Slovenia, Bukavec studied industrial design in his home country and later in Copenhagen, Denmark. He is prolific, innovative and clever.

When speaking about design, he always has a sparkle in his eyes, which are framed by studious glasses, but he is still a bit under the radar. Ouranos is only the second superyacht bearing his signature to be delivered. The first, Soraya, built in Turkey by Gentech, was penned some 10 years ago and was the first yacht under 100 metres to have a helipad on the foredeck. “We were trying something new,” he says.

Bukavec worked closely with The Italian Sea Group to come up with a look for a whole family of yachts, with sporty lines to recall earlier projects from the shipyard once known as Admiral Mariotti (The Italian Sea Group acquired Admiral, which had gone into bankruptcy, in 2011).

When it came to the big feature windows, he and the yard had a meeting of minds. Even The Italian Sea Group’s smaller yachts, such as the Impero series, have a large amount of glass. “It’s an idea that I try to insert in all my projects,” says Bukavec. “However the lines of the design go, you can always make a break in the centre. You get the light where you need it the most because usually that’s the area where the saloon is.”

There were many iterations of this feature, including one with sliding glass on the main deck to open up the saloon to the outdoors, a plan that was later abandoned on Ouranos but is still feasible should a client want it. This owner was very keen on keeping things simple and having the yacht ready to charter for summer, which dictated some of the design decisions.

“We were trying to get as much open space as possible everywhere,” says Bukavec. The quest for space prompted the choice to move the tenders to the foredeck and free the lower and upper aft decks from any cranes and toys.

In the endless pursuit to come up with practical solutions to make the yacht’s transom a real recreation space (and not a garage), superyacht designers and engineers have proposed many interesting ideas. Ouranos is another case in point. The superyacht beach club has an enclosed area behind glass doors, with a skylight to allow in natural light. The outdoor section is always open, protected from the elements on the side by slats that look like louvres, a design feature repeated on the upper decks for continuity.

Part of the swim platform folds up to meet the sides, forming a balcony, similar to that of a cruise liner. In a clement sea and at lower speed, it looks like a great spot to cast a line or position a chair to daydream and watch the wake trailing the yacht. At anchor, the beach club opens on all three sides.

This design had its challenges. Bukavec and the yard’s engineering team worked out some potential ergonomic pitfalls to get the necessary headroom in all areas of the beach club. Headroom, in fact, is a big feature throughout Ouranos, with 2.2 metres between decks.

Aside from meeting charter requirements, the design took great care to keep Ouranos below the 500 gross tonnage regulation threshold, which accounts in part for a beam of just 8.9 metres. But what everyone remembers is the way the yacht looks.

“I think Ouranos is a beautiful boat. It’s very aggressive and masculine. The comments we’ve heard are very good,” Chryssicopoulos says. Among guests’ favourite features are the beach club, a semi-enclosed dining area on the top deck, sheltered from direct sun and protected from the wind by glass partitions, and an extensive fleet of superyacht water toys that includes a mini submarine for shallow diving.

Two tenders reside on the foredeck and a 13.2 metre chase boat, the Omega 41, built by Greek company Technohull, with rakish looks to match its 70 knot top speed, follows wherever Ouranos goes.

Comfort, naturally, was also taken into account. Despite her aluminium superstructure and the panes of glass that bisect her profile at centreline (materials that can easily reverberate noise and vibration), Ouranos is a quiet superyacht. She scored highly in classification society RINA’s “comfort class” designation. This is a major source of pride for the shipyard and was an important consideration for the owner.

In Monaco, where Ouranos was shown for the first time, her chief engineer ran down a list of all the equipment that caters for guest comfort: a high-capacity chiller with four independent AC units (three running at once yield some 900,000 BTUs, which means a lot of chilled air), four TRAC stabilisers, two oversized generators, two watermakers producing one cubic metre per hour each, a 4,000 litre superyacht spa pool that fills up in 40 minutes, and redundancy and batteries that guarantee basic mechanical functions can be performed even in an unlikely blackout.

On the inside, the décor, developed in-house in consultation with the owner, is luxuriously simple. “It’s not minimalist,” says Chryssicopoulos, correcting my earlier assessment. “There is a lot of leather and marble,” he points out. The interior walked a narrow line to comply with the owner’s desire to keep things simple but to still be comfortably luxurious and attractive to charter guests.

The décor stems from designer Gian Marco Campanino, working with the owner and the yard’s in-house Admiral Centro Stile. Influenced by the name and the idea of constellations, the designer added some reflective materials and steel to a backdrop of ebony, with both a satin and matt finish. On the softer side are leather and suede from Tuscany in neutral tones.

“I made great use of these leathers; all of the ceilings are in ivory suede because it is very cosy and also very soundproof. This decision was inspired by my work on luxury cars,” he says.

In both the saloon and the upper saloon, the designer allowed the spectacular windows to do their job. “The colours are very neutral, from ivory to taupe, while some touch on brown. The idea was to create a juxtaposition with the blue and green of the exterior surroundings,” he says. “You get a lot of light and a lot of glass from the exterior, which on one side is very good, but you have to avoid too much reflection, so I chose to clad everything in these precious leathers to avoid this.”

Art pieces, including glass figurines displayed in backlit glass cases, were an integral part of the design. “The idea was to create something brand new, like an art collection,” says Campanino. It’s decorative but not fussy. “There are always points where you can find your privacy and there are places where you can have a conversation. It is easy to use. This was very important for the owner; he wanted his guests to feel like they already knew the boat, like they have been there before,” Campanino says.

Ouranos has a glass-enclosed superyacht elevator that delivers guests from their five lower-deck cabins to the upper deck, where one of three dining areas is located. It’s a good alternative to the fairly steep exterior stairs leading from the lower to the upper deck. Just forward of the exterior dining space on the upper deck, behind glass doors, is a comfortable air-conditioned bar offering good views and a lounge that invites relaxation.

Wide walkways on the main deck stop before the owner’s area, which includes a full-beam owner's cabin with spectacular vertical portholes, as beautiful from inside as they are from the outside. The top deck offers absolute privacy for sunbathing around the big spa pool. It also boasts another bar clad in marble. I was at the yard the day it was installed and it took eight strong men to nudge it into place.

Weight, though, is not much of an issue for this steel-hull displacement yacht. Her top speed is 17 knots but, when cruising among the Greek islands, what’s the hurry anyway? When you’re enjoying the inky vault strewn with stardust, you don’t need much speed.

First published in the April 2017 edition of Boat International