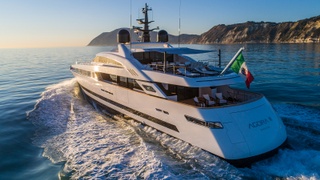 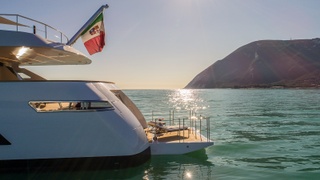 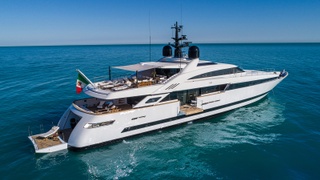 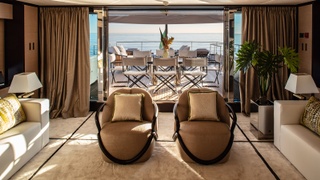 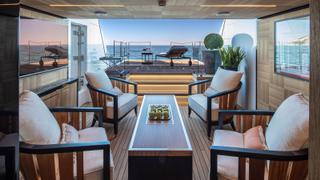 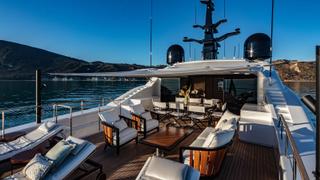 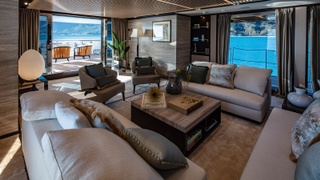 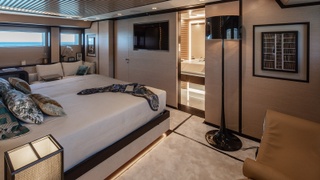 European shipyards are used to tailoring their offerings to clients based outside the Med, in the Middle East or Russia, for instance. But for Ancona-based ISA Yachts, its first ever client from Japan meant the yard had to radically rethink a few established conventions. The result, 43-metre Agora III, is now the largest private yacht in Japan.

“First of all, I think it’s important to understand that the owner is Japanese,” says Luca Dini, the yacht’s interior and exterior designer. Dini had penned the owner’s previous boat, a 32 metre built in Taiwan, so he was schooled in his tastes and culture. But this time, says Dini, “His dream was to have an Italian yacht – Italian, as in not only being from Italy but also with the recognisable design that is from an Italian pencil.”

This led designer and client to ISA, part of the Palumbo Group, which also owns the Columbus Yachts, Extra Yachts, Palumbo SY (refit) and Mondomarine brands. A proven semi-displacement platform was chosen in aluminium but, says Gianpaolo Lapenna, project and product executive director at ISA Yachts, “We adjusted everything which is above the waterline.” It became a highly customised project under the ISA brand that “comes directly from the idea of the owner and of the designer”.

The Italian styling that the owner desired was translated into sporty exterior lines. “He didn’t want to have three decks, because it is too high,” says Dini. “So this boat has two decks, but if you look at it from outside it seems to have a raised bridge, so we maintained the sporty line, and we’re giving him a lot of volume inside.”

Aside from this, the owner’s priorities were very different from what the Italians were used to. “This is quite an unusual yacht because the Far Eastern idea of a boat is completely different to our understanding,” says Lapenna. The project started “from the beach club” – not an uncommon obsession among owners – but this one was supersized for a very unusual reason. “This boat has no tender and no way to carry one,” says Lapenna. “In Europe we consider a yacht as a mother vessel, used with toys in order to enjoy the sea. This is the Western way. In Japan I understood that they have a completely different way to enjoy boating, which is to stay on the boat – no water toys, this is a floating house.”

The beach club allows the owner to enjoy the sea from the boat, in shaded privacy. Because the design did not need to assign volume for a tender and toys, this is a cavernous space for a 43-metre yacht. And whereas the beach club can sometimes feel like an afterthought, with a basic bar and couple of deck chairs shoved on the swim platform, as much design attention has been lavished upon this area as on the more traditional spaces inside. The teak-clad interior contains a cosy coffee area with custom-made teak chairs, a bar and fridge, plus a small dressing room and a dayhead forward. The broad swim platform aft is extended by the fold-down door that encloses the space during passages. Touches such as underlit stairs and a glass partition both delineate the indoor and outdoor portions of the space and add a dash of glamour.

This isn’t the only exterior area that’s worth a special mention. “There is a huge space for sunbathing on the upper deck. I think it’s amazing for this size of boat,” says Lapenna, “but I am 90 per cent sure that they will never use it for sunbathing.” This was another difference from sun-worshipping European owners – while a cooling al fresco breeze was welcome, UV rays were not. This space is therefore covered with an awning on carbon fibre poles, with a dining area forward, protected by haunches of superstructure on either side, a neat coffee area and – just poking out of the awning at the end – a couple of loungers.

The main aft deck below is almost entirely shaded by the overhang of the deck above. Inside, the layout is relatively conventional, with the owner’s cultural heritage infusing the decor. Dini describes it as a mix of Japanese and Italian style, both pared-back aesthetics that he says blend well. “Japanese style is very clean, very minimal, very natural. With this kind of soft touch that we give to the boat, I think the result is something that is really different.” It translates to, for example, shoji-inspired pillars between the seating and dining areas in the main saloon. They may be more substantial than the traditional paper and bamboo screens (and contain hidden storage for crockery and glasses – handy since the floor-to-ceiling windows don’t allow side cabinetry), but like shoji they divide the space while letting light through, and the dark wenge wood has an Asian feel. Meanwhile, a long panel of notched wood that runs down the centre of the space is reminiscent of tatami matting used in traditional Japanese flooring – a look echoed in the dark lines that break up the silky carpet into panels.

The style is neutral, calming and restrained, with a cool richness imparted by ceiling panels in a suede-like microfibre called Alcantara and marble in unexpected locations, such as on the walls just inside the main saloon, or on the tops of the dining and coffee tables. It’s also profoundly comfortable, homely, even residential – in line with Lapenna’s evocation of a house at sea. Take the sink-in chairs and sofas by Minotti in the main saloon, the proliferation of potted plants or the built-in display cases for books and objets d’art in the lobby. In the main saloon sitting room, terraces fold down port and starboard, enhancing the villa feel. The upper saloon has a cosier atmosphere but the space is still well lit via windows in the sloping superstructure. The main deck owner’s suite packs in plenty of comforts for spending long holidays on board, including a dressing table, desk, built-in bench for reading by the window and sofa, plus more marble in the forward en suite.

Crew areas and stairs sequestered in the centre of the main deck allow easy service throughout the boat, while staff can access the engine room via the beach club. Lapenna notes that naval architect Francesco Rogantin and the yard team did a “unique job fitting the engine room and the auxiliary apparatus on the side of the beach club in a very tight space.” Timescale was another achievement – construction took less than 18 months.

The finished boat, the largest private yacht in Japan, will be kept in Kobe and cruise among the islands there. “I made a brief investigation and I have to say that it is a wonderful place; it’s full of small islands and the sea looks incredible,” says Lapenna. “Surely it is something that we don’t know.” Perhaps discovering it will be another step in this fruitful cultural exchange.

All images courtesy of Maurizio Paradisi.

In pictures: On board the ISA Alloy 43 superyacht Agora III

Interiors inspiration: Voon Wong on designing an Andalusian villa with an Asian twist