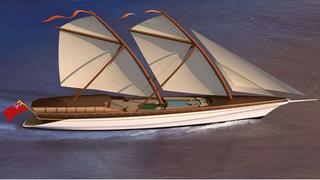 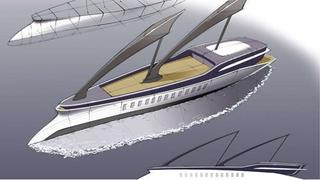 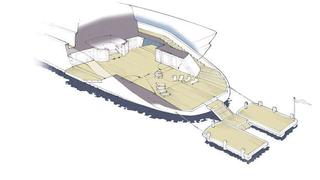 When the man who commissioned one of the most iconic and radically designed motor yachts afloat asks you to draw him a sailing boat, you need to do more than think outside the box. You’d better flatpack the box, fire it into space and forget that boxes ever existed.

‘The project started without a brief,’ says Peder Eidsgaard, creative director of Eidsgaard Design. ‘They said, “Create something crazy for us, just do something wild.” The length at that point was anything between 100 and 130 metres.’

Eidsgaard was invited to submit the design because of its work on the client’s Boeing business jet, ‘which they’re very happy with’.

While he did not choose to take Eidsgaard’s yacht design to a yard, the client’s unique influence on the artistic process led the designers to pen the extraordinary 144m Poseidon design. It is at an advanced stage of planning and the designers are awaiting another bold owner to take it to the build stage.

But_ Poseidon_ has changed a lot since its genesis. The first design Eidsgaard presented to the client took styling cues from classic ships, but was also extremely contemporary, with a dramatically raked-back rig and a hull reminiscent of the radical 119m motor yacht A.

‘They really liked this and the arrangement plan,’ says Eidsgaard, ‘but they felt maybe it’s gone a little bit too modern, so stepped back with all of the designers and had a rethink. We were then asked if we would be interested in doing the same concept with a more classical design.’

Eidsgaard began to emphasise the ‘galleon’ elements, such as an aft castle owner’s suite and a series of side windows reminiscent of gun ports (which fold down into verandas), as well as giving the yacht a classical bow.

‘Many owners like the romance of sailing, and this client also liked the old galleons with the romantic detailing and rigging,’ says Ben Harrison, a creative director at Eidsgaard Design.

While many of Poseidon’s features hark back to an earlier age, this second version is decidedly contemporary. For example, aft-raked masts and wishbone supports (for comfortable downwind sailing rather than racing) are modern, if not as radical as the original rig. The idea, says Harrison, was to create a boat that ‘from a distance you could think looks classical, but when you come up close is actually very contemporary’.