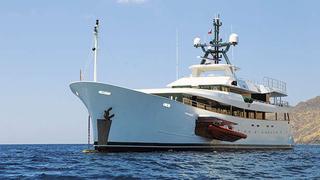 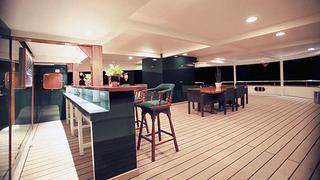 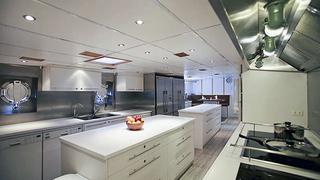 Once again the refit was radical, including completely new superstructure styling; the addition of a square transom and bathing platform to mask the old rounded stern, a wet exhaust; a full helipad aft on the upper deck capable of taking the owner’s Augusta 109; with a secondary touch-and-go pad on the master cabin roof; new side coamings; and a new, open-air sundeck.

Further, the interior was to go through a complete makeover, with a new master suite forward on the main deck, a new gourmet galley on the lower deck, the conversion of an office and gym to a second VIP cabin and a main saloon brought up to date with the latest AV equipment. It would be an 18 month project to turn Galapagos into Ark Angel.

Walking through the yacht just after she had returned from a maiden cruise as Ark Angel, it is apparent that she has come a long way from her days as Taishu Maru. Her hull retains some of the sheer that marks her more utilitarian background, but that is about the only clue to her origins, except for her distinctive underwater profile. The first obvious change is forward where the original well deck, retained on the first conversion to Tiara II, is now an enclosed tender and toy garage with shell doors in the hull.

Her profile is markedly different even from her prior incarnation as Galapagos. Gone are the superstructure uprights and fashion plates, and instead the main and upper decks appear to float above the hull line, an effect emphasised by the dark green paint applied to the recessed superstructure sides – an idea suggested by the owner’s wife.

The lower edge of the main deck profile mirrors the sheerline of the bulwark below, while the extension to the rear of the upper deck – which now forms the permanent helipad – gives her a long, lean and low look. The stern is perhaps the most interesting addition; this new section looks like it was part of the original design, until you open a door to one side of the transom to be confronted with the rounded stern of the original vessel.

The lower deck features most of the guest accommodation, set to port, with a VIP cabin aft and a second, full beam VIP amidships, with further cabins for staff and a nanny. To starboard, an impressive, long galley – extended from that of Galapagos – hints at culinary delights for those on board, and a snug table in the aft corner will surely be one of the most visited spots for guests.

Aft of the galley is a laundry and a separate ironing room, while various dry stores and additional fridge/freezer space is located aft in the original rounded stern.