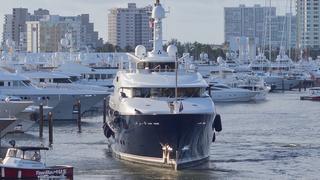 The fireworks are about to begin. It is November 5 after all – the opening day of the Fort Lauderdale International Boat Show, as well as the 410th anniversary that a certain Mr Fawkes tried to blow up the Houses of Parliament.

Perhaps the next five days on the Florida coast won’t quite match the drama of one of the notable moments in British history, but as a modern day spectacle it has few peers.

The largest in-water boat show on the planet that attracts over 100,000 visitors, increasing Fort Lauderdale’s population by nearly 60 per cent for the duration, and uses more power than the night of the Super Bowl is something to behold.

Those are but two of the facts surrounding FLIBS that will take your breath away as the organisers put together the finishing touches to greet those visitors and make the show the best experience possible.

Even after 28 years of staging Fort Lauderdale, Dane Graziano, chief operating officer for Show Management, which organises the event, still admits to butterflies in his stomach at the challenge of choreographing such a huge endeavour, especially on such a tight deadline.

He said staging the show is like building a city day by day.

“The hardest part is the time. If you have a bad rain day, you're behind a day, but you can't afford to be.”

The logistics for the show, now in its 56th year, are mind-boggling:

• Some 1,500 boats that must be manoeuvred in the water in the right sequence to fit into their berths

• Six giant air-conditioned tents that must erected, the largest one bigger than a football field.

And that doesn't include what it takes to transport 100,000-plus attendees between the six show venues. Mr Graziano said he charters 22 buses from across Florida and all 12 water taxis in the Fort Lauderdale area fleet.

Time may be tight but as Mr Graziano said: “Like any play or concert or production, you have to open. Thursday at 10am the show must go on.”

To make sure it does, all the people involved with Fort Lauderdale have been working rain or shine and around-the-clock.

And like the best fireworks, they shine the brightest and it is all over in a flash. But, again, not for the people involved. Scheduling for the event begins a year in advance — when the last show is dismantled. So when the last visitor leaves the show ground at 5pm on November 9, the hard work still continues.

It takes two weeks to dismantle all the stands and paraphernalia surrounding the show. But Mr Graziano would not have it any other way. It’s like it's my first show... You still feel that excitement."

Good job; only just over 10 months until he does it all again.