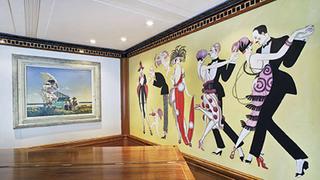 Protecting art on board superyachts

Adding the special touch that only a work of art can provide is one way to make a superyacht truly distinctive. However, carrying a multi-million dollar piece on board presents unique challenges, concerning the environment, security and insuring the pieces.

Beyond a yacht designers aesthetic and functional questions regarding placement, styling and securing the art, theres also the environment to consider. What happens, for example, if the air conditioning goes kaput?

Perhaps most important of all to a yacht owner who has spent millions cultivating their art collection is the matter of security. How safe from theft is a yacht, compared to a home or business? If the yacht is available for charter, is the security problem magnified? Finally, do any special insurance issues arise when major artworks are displayed on the water?

As Robert Salmon of The Willis Group explains, when a few pieces from a large, substantial collection are put on board a boat, the insurer looks at the collections total value and where it is displayed, which is usually in various residences.

Typically, the value of the art on the boat is not that great, relative to the sum of the whole collection, so coverage of it is essentially thrown in at a similar rate under a policy that covers the art collection separately from the yacht.

Art on the yacht of a non-collector is a completely different risk, says Salmon. Then you have works of art that are pretty much 100 per cent on a yacht.

In this case, the art may be covered as part of a policy purchased for the yacht herself. One consequence is that the art may not remain covered when it is moved off the yacht, which is a time when the possibility of damage to a piece increases.

For owners with a large collection, an art policy would cover such damage, but owners who have only one or two major pieces displayed aboard might not be covered, according to Nancy Poppe of The Willis Group.

Certain limitations may also apply when artwork is covered under a yachts policy.

Art varies greatly in value, ranging from a Picasso painting or a Giacometti sculpture that might be even more expensive than the yacht itself, down to a $50,000 Donald Demers oil-based nautical scene. Owners can cover the latter under the yachts insurance policy, but often only up to a point, says Scott Lockman, head of the yacht division at Marsh.

For example, coverage may be limited to $5,000 per item and top out at $50,000 in total. Of course, yacht owners always have the option of purchasing increased coverage for higher-valued pieces, or they can instead opt for a policy that covers their artwork separately.

The insurance company is not usually concerned with the yachts interior environment, feeling that its often superior to what many clients have in their homes. Physically speaking, the environment inside a superyacht would usually be considered a safe works of art. Temperature and humidity are kept constant and are maintained by a full-time crew. Even so, accidents can happen.

Its rare, but it does happen that you lose all power, notes Glade Johnson, a recently retired American yacht designer. The AC goes down, and youre sitting in the Med in the middle of summer. Youve got high humidity, and youre trying to get to a shipyard.

Paper art works, such as watercolours, are especially susceptible to environmental damage in adverse conditions, not only from humidity, but also from direct sunlight. Oil-based art and sculptures fare better in such an environment.

Insurance-wise, exposure to sunlight is an important consideration. If a work of art deteriorates because of too much sunlight, its considered gradual deterioration and subject to exclusion.